Gastric cancer (GC) is one of the fatal malignancies worldwide with high occurrences but poor outcomes. bFGF has been shown to play significant roles in GC. Yet, whether bFGF affects the development of GC is less studied.

Expression levels of miR-195-5p and bFGF showed negative correlation in human GC tissues. MiR-195-5p directly targeted bFGF 3′-UTR as demonstrated by luciferase activity assay. MiR-195-5p, through downregulating bFGF, inhibited the migration and invasion of SNU-1 and KATO-3 cells, as well as tumorigenesis in a xenograft mouse model, which could be restored by re-introduction of bFGF.

MiR-195-5p inhibits tumorigenesis of GC through suppressing bFGF, which supports both miR-195-5p and bFGF as potential therapeutic targets in the treatment of GC. 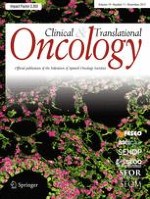