Although peripheral neuropathy is a common complication of microscopic angiitis, manifestations involving the muscle and the central nervous system have been rarely reported. We describe a 48-year-old man who rapidly developed a clinical picture of mononeuritis multiplex. A month after the appearance of the primary symptoms, he became comatose and had left hemiplegia in relation with a massive cerebral haematoma. Laboratory data revealed signs of inflammation, glomerular dysfunction with microhaematuria, and positive myeloperoxidase-antineutrophil cytoplasmic antibodies. The neuromuscular biopsy disclosed a small-vessel vasculitis, consisting with microscopic angiitis, associated with myositis and extensive axonal loss. The patient had surgical evacuation of the haematoma and received immunosuppressive therapy with good outcome. Thus, microscopic angiitis should be considered as a differential diagnosis in cases of myositis and intracerebral haemorrhage. 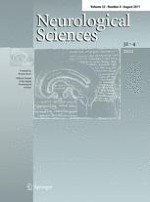 Prevalence of bifid median nerve at wrist assessed through ultrasound

Unusual cause of cerebral vasospasm after pituitary surgery