The reconstructive goals after laryngopharyngoesophagectomy are the reestablishment of the digestive conduit, achievement of adequate swallowing, and voice restoration. The pharyngoesophageal segment is typically reconstructed with a jejunal or a fasciocutaneous free flap. The gastro-omental free flap offers unique advantages in high-risk surgical fields. The best reconstructive option is still a matter of controversy. A retrospective study was conducted to assess the morbidity and functional results of microsurgical pharyngoesophageal reconstructions performed at our institution in the last 16 years and compare them with the literature.

A retrospective review was conducted on patients who underwent pharyngoesophageal microsurgical reconstruction between 1999 and 2016 at a single institution. The perioperative morbidity, mortality, and functional outcomes were evaluated and compared with similar published case series.

A total of 14 free flap reconstructions were performed, after pharyngolaryngoesophagectomy or pharyngoesophageal radionecrosis. Patients received jejunal, radial forearm, gastro-omental, or anterolateral thigh flaps. There was one flap failure and one perioperative death. The rates of stricture and fistula were 8.3 and 16.7%, respectively. Oral diet was achieved in all patients and 71% have been considered to have an intelligible speech. At 1-year post-op, 71.4% of the patients were alive and the 3-year survival rate was 35.7%. 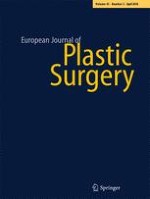 Clinical description of skin lesions in pathology requisition forms completed by plastic surgeons is lacking: a retrospective study of 499 lesions

Oncoplastic resection of breast cancers located in the upper-inner quadrants: a safe and effective surgical technique