This study investigated the covered trends in the number of doctors over time, a comparison of work formats (employment in hospitals versus clinics), and the trends in the ratio of female doctors. We used data from the Survey of Doctors, Dentists and Pharmacists from 1996, 1998, 2000, 2002, 2004, and 2006.

The decrease in general surgeons in Japan is largely often due to mid-career job separation. 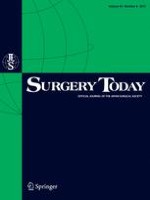 Controlling massive hemorrhage from the retropancreatic portal vein as a complication of thromboendovenectomy during liver transplantation with balloon catheter tamponade: how to do it

Laparoscopic repair of a Bochdalek hernia with incarcerated bowel during pregnancy: report of a case

Accuracy of sentinel node biopsy in esophageal carcinoma: a systematic review and meta-analysis of the pertinent literature