In order to elucidate the mechanism of adhesion between the gingiva and the tooth, detailed comparative ultrastructural studies of the dentogingival border were done in the monkey and shark. The tissues were prepared with or without demineralization for the ultrastructural observations. At the border, the internal basement membrane, which is firmly bound to the junctional epithelium through hemidesmosomes, was specialized differently in these species. In the monkey, the lamina densa was closely associated at its enamel side with an additional layer which had characteristics of the lamina densa and was referred to as the supplementary lamina densa. In the shark, the lamina densa showed a unique, hemidesmosome-related specialization in the form of the intermittent occurrence of bulges along its surface facing the epithelium. In nondemineralized tissues a part of the basement membrane, that is, the supplementary lamina densa (monkey) and the main lamina densa but not bulges (shark), was preferentially mineralized. The mineral deposit was continuous with that in the enamel and enameloid/dentine, thus constituting an advancing edge of mineralization. The network arrangement of the mineral crystals in the monkey basement membrane resembled the pattern of the cord network of the basement membrane, suggesting the presence of a delicate mutual basement membrane–mineral interaction. Thus, the organic phase and the mineral phase are allowed to make contact at this mineralized area of the basement membrane and firmly bind to one another. Therefore, strong gingiva–tooth adhesion is established by partial mineralization of the internal basement membrane, in a way similar to that found in the previously reported association of maturation stage ameloblasts with the enamel. 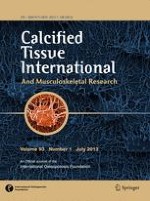 Effects of Phenol Red on CFU-f Differentiation and Formation