Conventional PCNL leads to a high stone-free rate but is associated with a significant treatment morbidity. To decrease the morbidity of PCNL but to achieve an equal stone-free rate, in 2001 a miniaturised version of a conventional PCNL (Mini-PCNL) was introduced. Meanwhile numerous modifications of the Mini-PCNL were reported. The ongoing experience with the Mini-PCNL technique showed that Mini-PCNL is not only a miniaturisation but also a different method to remove the stones, as the stones come out of the calyceal system only by means of the irrigation flow without any further need of forceps or baskets. Due to a limited number of papers in the literature, the guidelines so far do not distinguish between conventional and Mini-PCNL, although the Mini-PCNL already became a frequent treatment modality in daily routine worldwide. From the current point of view, Mini-PCNL can be recommended to treat all kinds of upper urinary tract stones exceeding a diameter of 10 mm. In this context, Mini-PCNL is a treatment alternative to flexible ureterorenoscopy, SWL and conventional PCNL. The available literature shows that the morbidity of Mini-PCNL is less and the stone-free rate is equal to that of conventional PCNL. It seems that there is no limitation to Mini-PCNL in the treatment of upper urinary tract stones. The future will show what kind of further miniaturisation of the Mini-PCNL procedure will be appropriate. 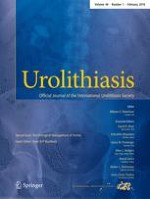 How can and should we optimize extracorporeal shockwave lithotripsy?

Ureteroscopy from the recent past to the near future