The online version of this article (https://​doi.​org/​10.​1007/​s00428-017-2278-9) contains supplementary material, which is available to authorized users.
Judicaël Hotton and Mikaël Agopiantz contributed equally to this work.

Minichromosome maintenance complex component 6 (MCM6) is involved in initiating DNA replication and is upregulated during licensed G0 phase of the cell cycle. This early expression permits its labeling of more proliferating cells than those by Ki-67. Here using a cohort of 89 endometrioid adenocarcinoma, we report findings made on the prognostic value of MCM6 based on immunohistochemical labeling index (LI) of the protein in comparison with that of Ki67 as no such information is currently available. Additionally, we examined the prognostic values of these markers based on their mRNA expression using a cohort of uterine corpus endometrial carcinoma (UCEC, n = 307) taken from The Cancer Genome Atlas (TCGA) database. Our evidence indicated the presence of a positive correlation between the LI of MCM6 and the histological grade of endometrioid endometrial adenocarcinoma (grade I, 66.7%; grade II, 75.3%; grade III, 81.4%; p < 0.001) and an inverse correlation between the LI of MCM6 and the overall and progression-free survival (p = 0.02 for both). The LI of Ki-67 correlated with grade (p < 0.001), but not survival. The MCM6 and Ki-67 inter-observer intra-class correlation coefficients were excellent: 0.84 (95% confidence interval, 0.83–0.91) and 0.84 (0.77–0.90), respectively. For in silico analyses of the TCGA cohort, both univariate and multivariate Cox analyses (p = 0.003 and p = 0.03, respectively) revealed high MCM6 mRNA Z-scores associated with reduced overall survival. This association was absent for Ki-67. MCM6 is thus a highly reproducible marker of poor prognosis in endometrial cancer. Evaluation of MCM6 should thus be considered in daily practice for risk stratification. 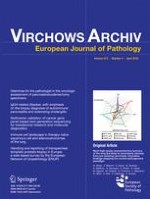 Dilemmas for the pathologist in the oncologic assessment of pancreatoduodenectomy specimens

IgG4-related disease: with emphasis on the biopsy diagnosis of autoimmune pancreatitis and sclerosing cholangitis