A systematic review of the literature was performed using the Medline, Embase, and Cochrane databases to identify all eligible studies that compared MIPD versus open pancreatoduodenectomy (OPD). The used search terms included “laparoscopy,” “minimally invasive,” “laparoscopic assisted,” “robotic,” robotic-assisted,” “pancreatoduodenectomy,” “pancreaticoduodenectomy,” “Whipple,” “Traverso,” “pancreatic head resection,” and “duodenopancreatectomy”. These terms were combined using Boolean operators “AND” and “OR”. References of the acquired articles were also hand-searched. Most recent search was done on 5th February, 2017. Ovid search strategy is available in supplementary file 1.

All references were reviewed and evaluated by two researchers. In case of doubt about inclusion, a third reviewer was consulted until consensus was reached. Only full length articles were eligible for extraction. When included, the following data were extracted: first author, year of publication, study design, number of operated subjects, 30-day readmission, conversion rate, perioperative, and short-term oncological outcomes.

Studies eligible for further analysis had to fulfill the following criteria: (1) comparison of characteristics and perioperative outcomes of mini-invasive techniques (laparoscopic or robotic surgery) to open approach in patients undergoing pancreatoduodenectomy, (2) objective evaluation of operative time and reports of pancreatic fistula, and (3) no language restrictions were used.

Studies were excluded when (1) lack of comparative data, (2) hand-assisted technique in the description of surgical methodology (especially anastomoses) or surgical method was unclear, (3) lack of primary outcomes or insufficient data to analyze, (4) studies regarding techniques other than pancreatoduodenectomy, and (5) extraction of data only on pancreatoduodenectomy not possible.
Anzeige

Analysis was performed using RevMan 5.3 (freeware from The Cochrane Collaboration). Statistical heterogeneity and inconsistency were measured using Cochran’s Q tests and I2, respectively. Qualitative outcomes from individual studies were analyzed to assess individual and pooled risk ratios (RR) with pertinent 95% confidence intervals (CI) favoring minimally invasive over open pancreatoduodenectomy and by means of the Mantel-Haenszel fixed-effects method in the presence of low or moderate statistical inconsistency (I2 ≤ 10%) and by means of a random-effects method (which better accommodates clinical and statistical variations) in the presence of high statistical inconsistency (I2 > 10%). When appropriate, mean and standard deviation were calculated from medians and interquartile ranges using a method proposed by Hozo et al. [ 12]. Weighted mean differences (WMD) with 95% CI are presented for quantitative variables using the inverse variance fixed-effects or random-effects method. Statistical significance was observed with two-tailed 0.05 level for hypothesis and with 0.10 for heterogeneity testing, while unadjusted p values were reported accordingly. Non-randomized studies were evaluated by the Newcastle–Ottawa Scale (NOS), which consists of three factors: patient selections, comparability of the study groups, and assessment of outcomes. A score of 0 to 9 was assigned to each study, and studies achieving a score of 6 or greater were considered high quality. This study was performed according to the Preferred Reporting Items for Systematic reviews (PRISMA) guidelines and MOOSE consensus statement [ 13, 14].

Initial reference search yielded 747 articles. After removing 185 duplicates, 562 articles had their titles and abstracts evaluated. This resulted in 83 papers suitable for full-text review, where 19 studies were review articles on the subject of pancreatoduodenectomy, 20 articles were excluded due to wrong study design, 23 because of the wrong type of intervention, three studies were based on national registries, and two did not provide sufficient data for inclusion. Four studies by Asbun et al., Stauffer et al. Mesleh et al., and Gumbs et al. met inclusion criteria; however, it was impossible to extract data on pancreatoduodenectomy alone. Besides, three of them included patients from the same pancreatic center treated in the overlapping period of time [ 15– 18]. Thus, they were excluded from further analysis. Finally, we enrolled 12 studies with a total of 2186 patients (705 underwent MIPD and 1481 underwent open procedure) (Table 1) [ 19– 30]. Quality of the analyzed studies according to NOS is high, with majority of studies scoring ≥7 out of 9. Authors were contacted to provide additional data on their studies. Flowchart of the analyzed studies is presented in Fig. 1.
Table 1
Study characteristics
LPD laparoscopic pancreatoduodenectomy, RPD robotic pancreatoduodenectomy, OPD open pancreatoduodenectomy, RS retrospective study, PS prospective study, SC single center, MC multi center, CM case matched, ND no data, MIPD minimally invasive pancreatoduodenectomy
×
The analysis revealed that MIPD group differed significantly in tumor size (reported in eight studies) in comparison to open approach (2.63 vs 3.26 cm, MD = −0.46 CI 95% −0.72–−0.20, p = 0.0005).
The operative time was reported by all authors. The mean total operative time for MIPD was 464 min, whereas for open procedure, it was 388 min. A subgroup analysis showed a mean value of 427 min for laparoscopic pancreatoduodenectomy and 482 min for robotic procedures. The analysis (Fig. 2) showed that the operative time was significantly shorter in the open procedure group: MD = 64.09, 95% CI 23.97–104.21, p for effect = 0.002, p for heterogeneity <0.00001, I 2 = 94%. However, a subgroup analysis revealed no statistically significant differences in both laparoscopic and robotic subgroup, which, together with high heterogeneity, limits the quality of evidence of this outcome.
×
Conversions were reported by eight authors. There were 31 (6.01%) conversions in total, with 11 (7.23%) in laparoscopic group and 20 (5.49%) in robotic.
Data on blood loss was presented in 10 of 12 studies. All authors, except Baker et al., Lai et al., and Zureikat et al., reported significant differences in this outcome. Mean blood loss for laparoscopic group was 350.8, 339.04 ml for robotic group, and 342.57 ml for the whole MIPD group, whereas in the case of open procedure, it was 534.67 ml. The analysis (Fig. 3) revealed a significant difference in both subgroups, as well as in total: MD = −190.65, 95% CI −265.40–−115.89, p for effect <0.00001, p for heterogeneity <0.00001, I 2 = 81%.
×
Overall morbidity was reported in 10 of 12 studies. Authors Bao and Croome were contacted to provide necessary data, with no response. Of all studies, only two authors, Delitto and Zhou, reported a significant difference in morbidity in analyzed groups. Meta-analysis of all included studies, as well as subgroup analysis, did not show statistically significant differences: 241/569 (42.36%) in MIPD and 446/1239 (36.00%) in the control group, RR = 0.84, 95% CI 0.68–1.04, p for effect = 0.12, p for heterogeneity = 0.0004, I 2 = 70% (Fig. 4).
×
Anzeige
All authors reported events of pancreatic fistula formation. International Study Group on Pancreatic Fistula (ISGPF) definition was used in 10 studies, while the remaining two described the definition of fistula in study methodology. Only one study, by Delitto et al., showed a significant difference in occurrence of fistula rate in favor of MIPD, whereas Zureikat et al. in their study from 2016 present data in favor of open approach. There were no significant variations among the studied groups: 132/705 (18.72%) in MIPD group vs. 204/1481 (13.77%) in control group, RR = 1.04, 95% CI 0.77–1.41, p for effect = 0.78, p for heterogeneity = 0.04, I 2 = 42% (Fig. 5).
×
Delayed gastric emptying was reported in eight studies. Only one, by Croome et al., showed a significant difference in rate of delayed gastric emptying in favor of MIPD. Subgroup analysis (Fig. 6) revealed a significant decrease in occurrence of delayed gastric emptying in the laparoscopic group ( p = 0.04, 95% CI 0.29–0.97), whereas this was not present in the robotic subgroup ( p = 0.19, 95% CI 0.62–1.1). In total, there was a significant variation in the rate of delayed gastric emptying with 73/395 (18.48%) in MIPD group and 110/583 (18.87%) in the open approach group: RR = 0.77, 95% CI 0.59–0.99, p for effect = 0.04, p for heterogeneity = 0.59, I 2 = 0%.
×
Postoperative hemorrhage was reported in six studies. None of the studies favored particular approach. There were no statistical significant differences in among analyzed groups: RR = 1.11, 95% CI 0.63–1.93, p for effect = 0.72, p for heterogeneity = 0.91, I 2 = 0%.
The number of harvested lymph nodes was reported in nine studies. There were no significant variations among the analyzed groups, both in total and in subgroup analysis: MD = 1.61, 95% CI −1.15–4.38, p for effect = 0.25, p for heterogeneity <0.0001, I 2 = 94% (Fig. 7). Due to high heterogeneity, a sensitivity analysis was performed. Three studies by Buchs et al., Bao et al., and Zureikat et al. (2016) were identified as the cause for most heterogeneity. Analysis without these studies provided heterogeneity with I 2 = 45%; however, the result was still stastically insignificant, p = 0.44.
×
Anzeige
R1 resection rate calculated separately for pancreatic malignancy was reported in 11/12; however, only in six extraction for pancreatic adenocarcinoma was possible. Of all studies, Zureikat et al. (2016) reported data in favor of open approach. Analysis of these six studies revealed no significant difference between the groups, 62/223 (27.80%) in MIPD vs. 200/727 (27.51%) in open approach group, p for effect  = 0.77, RR = 0.92, 95% CI 0.51–1.64, p for heterogeneity = 0.03, I 2 = 59% (Fig. 8).
×
Mean length of hospital (LOS) stay was reported in all papers, and in all of them, it included primary LOS (excluding potential readmissions). There was a significant reduction in LOS in the subgroup of laparoscopic surgery. Mean LOS for laparoscopic surgery was 8.2 days, while for the control group, it was 9.79 days (MD = −2.24, 95%CI −2.24–−0.80, p = 0.002). There were no statistical variations in LOS in the robotic group; however, authors Zhou, Lai, and Chen reported in their papers a significant reduction of LOS in the MIPD, whereas Boggi presented data favoring open approach. The analysis (Fig. 9) showed significant differences between studied groups in total: MD = −1.88, 95%CI −3.62–0.14, p for effect = 0.03, p for heterogeneity <0.0001, I 2 = 79%.
×
Thirty-day readmission rate was reported in three studies. The analysis revealed no stastically significant differences among analyzed groups, RR = 1.05, 95% CI 0.59–1.87, p for effect = 0.88, p for heterogeneity = 0.59, I 2 = 0%.

The findings of this systematic review and subsequent meta-analysis shows that minimally invasive pancreatic head surgery is not ready for general application and should be performed in specialized high-volume pancreatic centers with extensive expertise in minimally invasive surgery. Our review suggests that although MIPD takes longer, it may be associated with reduced blood loss, shortened LOS, and comparable rate of perioperative complications. However, it is based on non-randomized studies only of high-volume specialized centers. The differences in baseline characteristics of patients may possibly lead to a high risk of selection bias. In our opinion, the existing evidence for the use of laparoscopic surgery in pancreatic head malignancy is very limited and should be interpreted with caution. This supports the concept that further, better quality studies are needed to provide higher level of evidence on the benefits of minimally invasive approach in pancreatic head surgery.

This article does not contain any studies with human participants performed by any of the authors.
Open Access This article is distributed under the terms of the Creative Commons Attribution 4.0 International License (http://creativecommons.org/licenses/by/4.0/), which permits unrestricted use, distribution, and reproduction in any medium, provided you give appropriate credit to the original author(s) and the source, provide a link to the Creative Commons license, and indicate if changes were made. 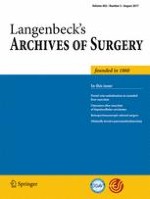 Laparoscopic anterior versus endoscopic posterior approach for adrenalectomy: a shift to a new golden standard?

The feasibility of laparoscopic pancreaticoduodenectomy—a stepwise procedure and learning curve