To evaluate the effects of signal intensity differences between the b0 image and diffusion tensor imaging (DTI) in the image registration process.

To correct signal intensity differences between the b0 image and DTI data, a simple image intensity compensation (SIMIC) method, which is a b0 image re-calculation process from DTI data, was applied before the image registration. The re-calculated b0 image (b0ext) from each diffusion direction was registered to the b0 image acquired through the MR scanning (b0nd) with two types of cost functions and their transformation matrices were acquired. These transformation matrices were then used to register the DTI data. For quantifications, the dice similarity coefficient (DSC) values, diffusion scalar matrix, and quantified fibre numbers and lengths were calculated.

The combined SIMIC method with two cost functions showed the highest DSC value (0.802 ± 0.007). Regarding diffusion scalar values and numbers and lengths of fibres from the corpus callosum, superior longitudinal fasciculus, and cortico-spinal tract, only using normalised cross correlation (NCC) showed a specific tendency toward lower values in the brain regions.

Image-based distortion correction with SIMIC for DTI data would help in image analysis by accounting for signal intensity differences as one additional option for DTI analysis. 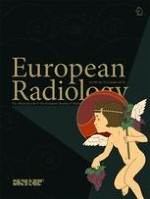 Gout of hand and wrist: the value of US as compared with DECT

Mesenteric lymph nodes in MR enterography: are they reliable followers of bowel in active Crohn’s disease?