This study explores minority group status in relation to change in quality of life (QOL) among three population groups in Israel—Veteran-Jews, Arab–Israelis, and immigrants from the Former Soviet Union (FSU)—controlling for a set of known predictors. The study uses panel data from two waves (2009/10 and 2013) of the Israeli component of the Survey of Health, Ageing, and Retirement in Europe, (N = 1590). A set of Ordinary Least Squares regressions is used to predict positive QOL change over the two waves. Interaction terms in a number of selected areas are considered. The results show that minority group status (Arab–Israelis and FSU immigrants) is negatively related to positive QOL change, compared to the majority group (veteran-Jews). Moreover, being employed was found to improve QOL for older FSU immigrants, underscoring the realm of work in the well-being of this population group. In comparison, it was exchange with family members that had a positive effect on QOL change among the Arab–Israelis, emphasizing the importance of that particular aspect of their lives in older age. In sum, the results highlight the risk of minority group status to well-being in late life and confirm the observation that positive QOL change correlates with characteristically different factors among different population groups. 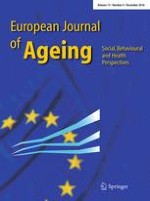 Antecedents of late life outcomes: the case of Israel

Migration and changes in loneliness over a 4-year period: the case of older former Soviet Union immigrants in Israel