We examined knowledge about the role of randomness in gambling and the principle of independence of events, in a community sample. We also investigated whether this knowledge varies according to gender and age. A convenience sample of 1257 residents in French-speaking Switzerland, aged 18–88 years (28.5% of women) completed a short online questionnaire. This assessed the perceived role of human skills in four different games as well as beliefs relating to the principle of independence of events. The results show that 19.5% of the respondents perceived Roulette as a game for which the outcome is determined by skill. They also showed that 15.1% of the respondents did not hold beliefs about the independence of events principle. Gender and age differences were also observed: Men were proportionally more likely to hold erroneous beliefs about gambling skills and the independence of events, compared to women. The 18–25 year-old age group attributed Roulette outcomes to the gambler’s skill more frequently than the older categories. The implications of these findings for prevention and social support are discussed. 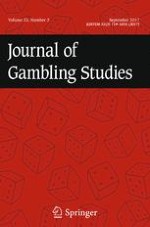 Rise of the Machines: A Critical Review on the Behavioural Effects of Automating Traditional Gambling Games