Lectins are a class of carbohydrate-binding proteins or glycoproteins and used in the purification and characterization of glycoproteins according to their specificity to carbohydrates. In the present study, the mitogenic activity of Artocarpus lingnanensis lectin (ALL) and its apoptosis induction in Jurkat T cells were explored. MTT assay revealed strong mitogenic potential of ALL. Meanwhile, the anti-cancer activity of ALL was also explored using the human leukemic Jurkat T cell line. ALL exhibited strong binding affinity (97%) to the cell membrane, which could be effectively inhibited by N-acetyl-d-galactosaminide (NAD). ALL induced time- and dose-dependent growth inhibition in Jurkat T cells. ALL could induce morphologic change and increase the hypodiploid cell population with the decreased population of S and G2/M phases. The induction of phosphatidylserine externalization and PARP cleavage further confirmed its apoptosis-inducing activity due to the activation of caspase-8 and -9. The inhibition of caspase-9 but not caspase-8 could rescue ALL-induced apoptotic cells. Further studies showed that ALL enhanced the cleavage of Bid, the release of cytochrome C, the depolarization of mitochondria and the activation of caspase-3. ALL downregulated the expression of Bcl-xl and Bcl-2 without impact on Bax and Bad. In addition, the activation of p38/JNK MAPK signaling pathways was observed to be a requisite for ALL apoptotic activity. In contrast, ALL could not induce apoptosis of normal T cells. These findings present the differential effect of ALL on Jurkat and normal T lymphocytes, suggesting its therapeutic value in leukemia. 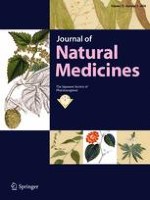 Appetite-enhancing effects of vanilla flavours such as vanillin

Quantitative analysis of the anti-inflammatory activity of orengedokuto II: berberine is responsible for the inhibition of NO production