The aim of this study is to determine whether the modified BuCy (semustine, cytarabine, busulfan, and cyclophosphamide, mBuCy) conditioning regimen can be safely used as an alternative to the SEAM (semustine, etoposide, cytarabine, and melphalan) regimen by comparing the efficacy and toxicity of the mBuCy and SEAM regimens. We matched 34 pairs of patients with regard to disease status at the time of autologous stem cell transplantation (auto-SCT). We found no significant difference in the time of platelet engraftment between the two groups. Furthermore, neutrophil engraftment was somewhat faster in the mBuCy group than in the SEAM group (median: 9 days vs 10 days, p = 0.015). With regard to toxicity, the incidence of nausea/vomiting, hepatic impairment, renal impairment, pulmonary infection, and treatment-related mortality (TRM) was similar between the two groups. In addition, compared to patients conditioned with SEAM, patients conditioned with mBuCy were less likely to develop mucositis and diarrhea (p = 0.027; p = 0.050). The 2-year progression-free survival (PFS) rates in the mBuCy and SEAM groups were 79% and 70% (p = 0.378), respectively, and the 2-year overall survival (OS) rates were 81% and 78.0%, respectively (p = 0.789). These analyses showed that the mBuCy conditioning regimen was well tolerated and can be used as an alternative to the SEAM regimen for lymphoma. 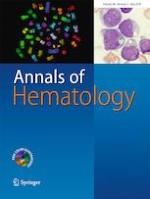 Stage I non-Hodgkin lymphoma: no plateau in disease-specific survival ?