Modulation of the Expression of Long Non-Coding RNAs H19, GAS5, and MIAT by Endurance Exercise in the Hearts of Rats with Myocardial Infarction | springermedizin.de Skip to main content
TOOLBAR 1 2 3 4
SUCHE MENÜ 1 2 3 4

Long non-coding RNAs (lncRNAs) have a critical role in the regulation of cardiovascular function. Dysregulation of lncRNAs is implicated in the progression of cardiovascular diseases including myocardial infarction (MI). Regarding the beneficial effects of exercise (Ex) on the improvement of MI, this study aimed to investigate the effects of post-MI Ex on the expression of MI-associated lncRNAs: H19, myocardial infarction association transcript (MIAT), and growth arrest specific 5 (GAS5). MI was induced by left anterior descending (LAD) coronary artery ligation in male Wistar rats. One week later, rats were exercised under a moderate-intensity protocol for 4 weeks. In the end, hemodynamic parameters and cardiac function indices were measured. Assessment of fibrotic areas and apoptosis was performed by Masson's trichrome staining and immunohistochemistry, respectively. Expression of genes was evaluated by real-time PCR. Ex significantly reduced the fibrotic areas (P < 0.05) and apoptosis and increased contractility indices (P < 0.01), and cardiac function (P < 0.05) in MI groups. The reduced expression of H19 (P < 0.01) in MI rats returned to normal levels by Ex. Ex significantly (P < 0.001) reduced the expression of MIAT and increased the expression of GAS5 (P < 0.01), which had changed in the hearts of rats with MI. The present study indicated the beneficial effect of Ex on the improvement of cardiac function and reduction of fibrosis in infarcted heart possibly through regulation of the expression of lncRNAs: H19, GAS5, and MIAT. 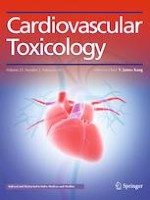 Identification of Clinical and Laboratory Variables Associated with Cardiotoxicity Events Due to Doxorubicin in Breast Cancer Patients: A 1-Year Follow-Up Study

Caspofungin Effects on Electrocardiogram of Mice: An Evaluation of Cardiac Safety