Gastric cancer (GC), one of the most common human cancers, is a heterogeneous disease with different phenotypes, prognoses, and responses to treatment. Understanding the pathogenesis of GC at the molecular level is important for prognosis prediction and determining treatments. Microsatellite instability (MSI), silencing of MLH1, MGMT, and CDKN2A genes by DNA hypermethylation, KRAS mutation, APC mutation, and ERBB2 amplification are frequently found in intestinal type GC. Inactivation of CDH1 and RARB by DNA hypermethylation, and amplification of FGFR and MET, are frequently detected in diffuse type GC. In addition, BST2 and PCDHB9 genes are overexpressed in intestinal type GC. Both genes are associated with GC progression. GC can be divided into gastric/intestinal mucin phenotypes according to mucin expression. MSI, alterations of TP73, CDH1 mutation, and DNA methylation of MLH are detected frequently in the gastric mucin phenotype. TP53 mutation, deletion of APC, and DNA methylation of MGMT are detected frequently in the intestinal mucin phenotype. FKTN is overexpressed in the intestinal mucin phenotype, and IQGAP3 is overexpressed in the gastric mucin phenotype. These genes are involved in GC progression. To characterize cancer stem cells, a useful method is spheroid colony formation. KIFC1 and KIF11 genes show more than twofold higher expression in spheroid-forming cells than that in parental cells. Both KIF genes are overexpressed in GC, and knockdown of these genes inhibits spheroid formation. Alterations of these molecules may be useful to understand gastric carcinogenesis. Specific inhibitors of these molecules may also be promising anticancer drugs. 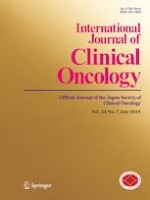