In a prospective, nonrandomized, comparative study, MCI (n = 35 eyes) through the inferior canaliculus or BCI (n = 35 eyes) were performed under general anaesthesia in children aged 10 to 36 months with CNLDO. The tubes were removed 3–4 months after tube placement, and the children were followed up for 6 months after the removal of tubes. Therapeutic success was defined as the fluorescein dye disappearance test grade 0–1, corresponding with a complete resolution of previous symptoms. Partial success was defined as improvement with some residual symptoms.

Both MCI and the BCI are effective methods for treating CNLDO. MCI has the advantage of a lower incidence of canalicular slit and easy placement. 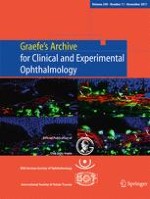 Incidence of sports-related eye injuries in the United States: 2001–2009

Detection of visual field progression in glaucoma with standard achromatic perimetry: A review and practical implications