Mortality within 1 year after hip fracture surgical repair in the elderly according to postoperative period: a probabilistic record linkage study in Brazil | springermedizin.de Skip to main content
TOOLBAR 1 2 3 4
SUCHE MENÜ 1 2 3 4

This project was sponsored by the Brazilian National Council for Scientific and Technological Development (CNPq), Edital CNPq 19/2004, (471562/2004-1).

The purpose of this study was to assess, by applying probabilistic record linkage (PRL) methodology, the excess mortality and underlying causes of death in a cohort of elderly patients who underwent hip fracture surgical repair during 1995 in Rio de Janeiro, Brazil.

We searched the Brazilian Hospital Admission Information System (HAIS) for the city of Rio de Janeiro, identifying all cases of elderly patients who had hip fracture surgery between January 1 and December 31, 1995, and by means of the PRL methodology and RecLink software, crosslinked those data with the Brazilian Mortality Information System (MIS) for the same region for a follow-up period of 1 year. We calculated age- and gender-adjusted standardized mortality ratios (SMR) for three periods of time—1–30 days, 31–90 days, and 91–365 days after hospital admission—and analyzed the basic cause of death as reported in the death certificates and noted the death occurred at the index admission or after hospital discharge.

We found an overall 21.5% (95% CI 18.2–24.9) mortality rate in 1 year and a statistically significant SMR of 1,080 (95% CI 794–1450) and 512.8 (95% CI 366.4–698.3) for the first two periods, 1–30 days and 31–90 days after hospital admission, respectively. For the last period the SMR displayed a statistically nonsignificant trend of 137 (95% CI 99–183). Even in the first 15 days after the index hospital admission, most deaths (55.1%) occurred after hospital discharge, reinforcing the importance of linking hospital mortality databases with general population mortality information systems. The leading three basic causes of death, as reported in death certificates, were cardiovascular events, falls, and infections. This study represents an example of the application of PRL methodology to produce relevant data on hip fracture, a subject of rising epidemiological importance in developing countries. 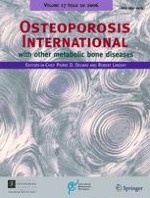 The role of socioeconomic status on hip fracture

Osteocytes—martyrs for integrity of bone strength