Curative resection has been shown to be one of the key factors influencing survival of pancreatic ductal adenocarcinoma (PDAC) patients. Although general guidelines for the processing of pancreatic specimens have been established, there is currently no widely accepted standardized protocol for pathological examination, especially with respect to resection margins.

Here we present a single-center experience with 111 consecutive macroscopic complete pancreatic head resections for PDAC carried out between 2005 and 2006 by using standardized pathological processing and reporting. The pancreatic transection margin, as well as the bile duct and stomach/duodenum margins and the circumferential soft tissue margins (medial, anterior surface, superior, and posterior), were inked and analyzed. R1 was defined as a distance of the tumor from the resection margin of ≤1 mm.

This study highlights the importance of pathological reporting and suggests that tumor growth patterns and thorough examination but not surgical technique determine R1 resection rates in PDAC. 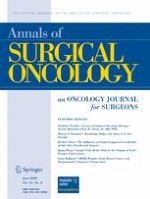 Minimal Residual Disease in Breast Cancer: Can It Be Used as a Prognostic Marker?

Knowledge Helps, but Alone It Is Not Enough