Moving toward the automation of the systematic review process: a summary of discussions at the second meeting of International Collaboration for the Automation of Systematic Reviews (ICASR) | springermedizin.de Skip to main content
TOOLBAR 1 2 3 4
SUCHE MENÜ 1 2 3 4

The International Collaboration for Automation of Systematic Reviews (ICASR) is an interdisciplinary group with a shared interest in maximizing the use of technology to aid the transfer of scientific research findings to practice and decision-making. ICASR focuses on automation, rather than specific applications in any particular scientific domain. The group’s aim is to develop the capability for conducting rapid, accurate, and efficient systematic reviews of scientific evidence. Without an automated method for reviewing thousands of research articles, including the many published every year, the findings might be overlooked when developing new policy. Having automated tools for systematic review should enable more transparent and timely review, maximizing the potential for identifying and translating research findings to practical application. As a consequence of this shared goal, the first meeting of ICSAR was held in September 2015 in conjunction with the 23rd Cochrane Colloquium in Vienna, Austria. At that meeting, the group established a set of guiding principles for advancing methods in automation of systematic reviews, referred to as the Vienna Principles (Table  1, http://​ebrnetwork.​org/​the-vienna-principles/​). The second meeting was held 3–4 October 2016 in Philadelphia, Pennsylvania, USA.
Table 1
Guiding principles proposed at 1st ICASR meeting in Vienna ( http://​ebrnetwork.​org/​the-vienna-principles/​)
The goals of the second ICSAR meeting were to (1) facilitate discussion within the community and foster collaboration among different stakeholders, (2) gather viewpoints on the progress toward automation made to date and outstanding challenges, and (3) gather opinions on approaches to potential solutions that might guide future projects. The meeting sought to include the spectrum of domains necessary to achieve these goals, including users of summarized research, methodologists, and technologists. Users include producers and consumers of systematic reviews from any domain that uses research reviews. Methodologists are those who explore the production processes and quality of systematic reviews. Technologists are software developers, statisticians, and vendors with skill sets not necessarily specific to automation of systematic reviews, although most have applied their skills and expertise to this problem domain in the past. That some participants naturally fit into one group was acknowledged, while others straddle two or all three.
Anzeige

The second ICASR meeting began with a discussion of the scope of ICASR. This discussion affirmed the premise that ICASR seeks to apply research synthesis methods to all areas of science. Scientific areas of interest to participants included clinical health, public health, preclinical research, food production, ecology, wildlife, and environmental health. Many disciplines in the scientific community that synthesize research and use the systematic review methodology are not currently represented in ICASR. ICASR should seek to engage those disciplines, and those community members should be given the opportunity to adopt or adapt automation tools as needed.
The role of ICASR in tool development was discussed. As used here, “tool” refers to a software application with a user interface that fully or partially automates a task conducted by systematic reviewers. It is thus distinct from an algorithm (which might be embedded in a tool), in that the tool is accessible and usable by people without programming skills. The technologists indicated that development of scalable and generalizable tools is a standard for the industry, with the aim of having common tools that can be tailored as needed. The tailoring of tools is a challenge for the community, because many developers and funders focus on tools for specific tasks. Converting, adapting, and validating those tools to work on the same task in other areas can seem duplicative. The goal of the collaboration, however, is not to develop or support a particular synthesis pipeline or set of tools but rather to create a community where multiple tools can be shared with the goal of more rapid progress.
Meeting participants were presented with the idea that ICASR should foster the development of a system that would connect individual automation tools in a system of shared protocols. This system and integration would promote open collaboration between groups (some working on interoperability “backbone” systems, some on individual tools). Interconnectedness was considered critical for rapid progress. For tool developers, the advantages are rapid adoption and adaptation of domain-specific tools to other scientific domains. Such an approach maximizes the reach of tools. For domain-specific users, the advantage of interconnectedness is the ability to adopt and adapt tools developed by others.
Further to the guiding principles the Vienna Principles embody, the participants proposed that the technical principles for the ICASR would also include:
Anzeige

The goal of the meeting was to:
The first goal of the meeting was to identify common needs for automation across scientific domains and the common challenges in meeting those needs. The approach to addressing this issue was threefold. First, paired participants discussed their needs and challenges. Then, groups of five to seven participants were asked to consider all presented information and to identify, consistent with the goal above, issues that would enable rapid and broad progress if they could be resolved. The third task occurred on the second day of the program, which aimed to identify how to meet the challenges to near-term progress. Three groups were formed, and project leaders guided group discussion on specific topics with identification of short-term goals (6 months) and longer-term goals (about 3 years). The project topics related to prototyping a system for maintaining “living” systematic reviews, increasing efficiency of citation screening via a pipeline of multiple tools, and integration across platforms via an extraction dashboard. These discussions were then shared across all groups for discussion and critique.

Common needs and challenges for systematic reviews across scientific domains

Several challenges were identified during the meeting (Table  2). Some challenges are somewhat philosophical and relate to technology acceptance. More immediate challenges are (1) communication issues between groups that are developing tools, (2) accurate data extraction, and (3) translation of available technology to tools with user interfaces that would allow users to incorporate them into realistic workflows. Although participants recognized that many tasks in the systematic review process need tools, an interesting gap between technologists and users was noted. Technologists did not consider semi-automating the identification of relevant studies a current challenge, as this is currently in practice in software packages such as Abstrackr and Eppi Reviewer Software. 1 However, the state of the art is not such that producers of systematic reviewers routinely use these systems, and several explanations were voiced. Two are a lack of transparency by machine-learning systems and a shortage of studies showing the benefits of screening systems in a variety of scientific disciplines. Of the remaining tasks or steps, accurate data extraction of study characteristics was identified as a current challenge by algorithm developers. Other tasks, such as automated reporting using general tools for reproducible research and reporting (e.g., Rmarkdown and knitR 2) or specialized packages (e.g., RevMan HAL 3), were considered important, although less technically challenging. 4
Table 2
Challenges to automation identified by meeting participants and invited speakers

The workshop identified several short-term projects to advance the goal of automating tasks in the systematic review workflow.

A more comprehensive understanding is needed of the processes required to complete the tasks or steps in a systematic review. Also needed is knowing what tools could be made available for users to complete those tasks, that is, a story-board for conducting a review. Such information would facilitate a common approach to tool development and could improve communication with funders, producers of systematic reviews, and developers. As the producers of systematic reviews seeks to create user-friendly tools, developers should have comprehensive, standard use-cases, to ensure users can seamlessly adopt the tools. For example, a use-case for relevance screening would list the actions or events that define the interactions between the producers of systematic reviews and any software systems (such as search engines, reference managers, and screening tools) to achieve a goal of identifying relevant studies. From the time the protocol for the systematic review is conceived to the time the review is updated, having use-cases documenting the needs of all users, where available, for the developers working in the ICASR would be most efficient.

Promoting the validation of tools is essential. One approach is to develop and maintain validated datasets that tool developers could use; however, such datasets are often limited in scope, because they are validated only for the original investigator’s purpose. Strategic compilation of “gold-standard” annotated datasets covering a range of topics would be ideal to ensure sufficient variation in training and validation datasets. An essential component of validation is to define what constitutes a minimal validation standard.

A widely recognized need is to develop data extraction tools that would enable annotation of full texts, extraction of data and information to assess risk of bias, and transfer of data to next steps in review tasks. This area, in particular, would benefit from further collaboration between users and developers. Currently, no agreement has been reached on which elements to extract, how accuracy would be measured, and how these data can be shared in the collaboration. Further hindering this issue are questions around copyright and permission to share annotated documents.

Participants agreed that having a standard method for tools to interoperate would be beneficial. In particular, standardization would allow users to readily understand the tools, reducing the effort needed for developing algorithms and incorporating them into tools. The main method for tool interoperability discussed was an API that can manage references and the data they contain so that these can be passed from one tool to another.
Anzeige
Systems that host the API and provide it to other tools are called “backbone” systems. Individual tools that implement the API could then be used as part of any backbone system.

ICASR 2016 provided a beneficial forum for engaging a range of disciplines and expertise in focused discussion about tool development and resources to advance the automation of systematic reviews. The meeting highlighted challenges, both simple and complex, and raised awareness among participants about ongoing efforts by various stakeholders. ICASR hopes to foster continued interaction and communication among stakeholders as efforts in systematic review automation progress.
Anzeige

ICASR 2016 was supported by the National Toxicology Program at the National Institutes of Health (contract GS00A14OADU417/HHSN273201600015U) and Iowa State University.

Springer Nature remains neutral with regard to jurisdictional claims in published maps and institutional affiliations.
Open AccessThis article is distributed under the terms of the Creative Commons Attribution 4.0 International License ( http://​creativecommons.​org/​licenses/​by/​4.​0/​), which permits unrestricted use, distribution, and reproduction in any medium, provided you give appropriate credit to the original author(s) and the source, provide a link to the Creative Commons license, and indicate if changes were made. The Creative Commons Public Domain Dedication waiver ( http://​creativecommons.​org/​publicdomain/​zero/​1.​0/​) applies to the data made available in this article, unless otherwise stated.
Footnotes
1
http://​eppi.​ioe.​ac.​uk/​cms/​Default.​aspx?​alias=​eppi.​ioe.​ac.​uk/​cms/​er4.
2
Xie, Yihui. Dynamic Documents with R and knitr, Second Edition. 2013. Chapman & Hall/CRC The R Series. ISBN-13: 978-1498716,963. ISBN-10: 1498716,962.
3
http://​schizophrenia.​cochrane.​org/​revman-hal-v4.
4
Influences of Reproducible Reporting on Work Flow. http://​chance.​amstat.​org/​2015/​11/​reproducible-reporting/​.

Titel
Moving toward the automation of the systematic review process: a summary of discussions at the second meeting of International Collaboration for the Automation of Systematic Reviews (ICASR)
Autoren:
Annette M. O’Connor
Guy Tsafnat
Stephen B. Gilbert
Kristina A. Thayer
Mary S. Wolfe 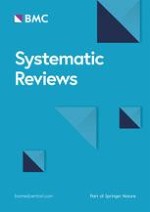 Deworming in non-pregnant adolescent girls and adult women: a systematic review and meta-analysis

Resilience to climate-induced disasters and its overall impact on well-being in Southern Africa: a mixed-methods systematic review protocol

Single screen of citations with excluded terms: an approach to citation screening in systematic reviews

A study of the value of requesting information from drug manufacturers for systematic reviews; 9 years of experience from the drug effectiveness review project

Factors associated with preoperative attrition in bariatric surgery: a protocol for a systematic review