To characterize the MRI appearance of the anomalous volar radiotriquetral ligament in cases of classic Madelung deformity.

With institutional review board approval, a search of the radiology information system was performed to identify cases of potential Madelung deformity using variations of the criteria “Madelung deformity.” Cases of classic Madelung deformity were included based on the following criteria: dorsal subluxation of the ulnar head, volar tilt of the distal radius, increased radial inclination of greater than 25°, triangulation of the carpus, and presence of Vickers ligament defined as an anomalous volar radiolunate ligament. Patients with a history of wrist trauma or severe degenerative change distorting anatomy were excluded. The resulting cases were reviewed to characterize the anomalous radiotriquetral ligament. 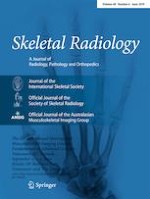 Femoral head subchondral impaction on CT: what does it mean in patients with acetabular fracture?

MR and ultrasound of the hands and wrists in rheumatoid arthritis. Part II. Added clinical value

Single-shot CT after wrist trauma: impact on detection accuracy and treatment of fractures