This study evaluated the ability of routine 1.5-T MRI scans to visualize the anterolateral ligament (ALL) and describe its path and anatomic relations with lateral knee structures.

Thirty-nine 1.5-T MRI scans of the knee were evaluated. The scans included an MRI knee protocol with T1-weighted sequences, T2-weighted sequences with fat saturation, and proton density (PD)-weighted fast spin-echo sequences. Two radiologists separately reviewed all MRI scans to evaluate interobserver reliability. The ALL was divided into three portions for analyses: femoral, meniscal, and tibial. The path of the ALL was evaluated with regard to known structural parameters previously studied in this region.

At least a portion of the ALL was visualized in 38 (97.8 %) cases. The meniscal portion was most visualized (94.8 %), followed by the femoral (89.7 %) and the tibial (79.4 %) portions. The three portions of the ALL were visualized in 28 (71.7 %) patients. The ALL was characterized with greater clarity on the coronal plane and was visualized as a thin, linear structure. The T1-weighted sequences showed a statistically inferior ligament visibility frequency. With regard to the T2 and PD evaluations, although the visualization frequency in PD was higher for the three portions of the ligament, only the femoral portion showed significant values.

The ALL can be visualized in routine 1.5-T MRI scans. Although some of the ligament could be depicted in nearly all of the scans (97.4 %), it could only be observed in its entirety in about 71.7 % of the tests. 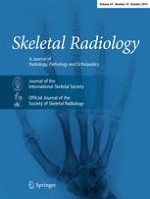 Short-term spontaneous regression of myxofibrosarcoma in the scapular region