We report four patients with mucinous adenocarcinoma of the prostate, focusing on their magnetic resonance imaging (MRI) findings. The lesions appeared hyperintense on T2-weighted images (T2WI) in all four patients. In the two patients in whom the tumors were confined to the peripheral zone (PZ), the lesions were isointense to the surrounding normal PZ, making them difficult to identify. In all three patients who underwent diffusion-weighted imaging (b = 1000), the lesions appeared hyperintense but visually there was little or no decrease in the apparent diffusion coefficient (ADC), with ADC values of 1.02, 1.39, and 1.66 × 10−3 mm2/s, respectively. In the three patients who underwent a dynamic contrast-enhanced MR study, early enhancement was evident in two (partial in one), and gradually increasing enhancement in one. 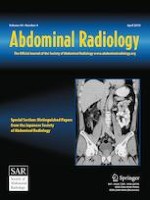