To compare the sensitivity of MRI to detect colorectal cancer liver metastases (CRLM) after ingestion of manganese-based contrast agent (CMC-001) with that of a comprehensive intravenous gadobenate dimeglumine protocol, and to assess the safety and acceptability of oral manganese.

20 patients suspected of having 1–6 CRLM were included prospectively in this randomised cross-over study. Liver MRI was performed with a one-week interval at 1.5 T and included T1-w VIBE and T2-HASTE, before and after administration of 1.6 g CMC-001 or 0.1 mmol/kg gadobenate dimeglumine. The metastasis-to-liver signal intensity (SI) ratio was calculated. Standard of reference was histopathology after surgery, or combination of other imaging studies and/or follow up. Adverse events (AE) and clinicolaboratory tests were monitored.

CMC-001 is as sensitive as an extensive intravenous gadobenate dimeglumine protocol in detecting CRLM. It was relatively well tolerated but had higher rates of gastrointestinal AE. 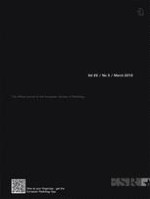 Functional MR imaging of the Eustachian tube in patients with clinically proven dysfunction: correlation with lesions detected on MR images