In childhood, the MR characteristics of the normal pituitary gland are well established. During the first 2 months of life the adenohypophysis demonstrates high signal. Pituitary gland height (PGH) decreases during the 1st year of life and then increases, reaching a plateau after puberty. The magnetization transfer ratio (MTR) increases in both sexes up to the age of 20 years. On dynamic contrast-enhanced studies, the posterior pituitary lobe enhances simultaneously with the straight sinus, and the adenohypophysis later, but within 30 s. In genetically determined dysfunctional states, the adenohypophysis may be normal, hypoplastic, or enlarged. Pituitary enlargement, observed in Prop 1 gene mutations, is characterized by a mass interposed between the anterior and posterior lobes. An ectopic posterior lobe (EPP), associated with a hypoplastic or absent pituitary stalk, may be observed in patients with hypopituitarism. Tumors of the hypothalamic-pituitary (HP) axis may be the origin of adenohypophyseal deficiencies. A small hypointense adenohypophysis is found in iron overload states and is often associated with hypogonadotrophic hypogonadism. Absence of the posterior lobe bright signal, with or without a thick pituitary stalk or a mass at any site from the median eminence to the posterior pituitary lobe, may be found in diabetes insipidus. Hydrocephalus, suprasellar arachnoid cysts, hypothalamic hamartomas and craniopharyngiomas may result in central precocious puberty (CPP). Increased PGH in girls with idiopathic CPP is useful for its differential diagnosis from premature thelarche (PT). Pituitary adenomas, observed mainly in adolescents, present the same MR characteristics as those in adults. 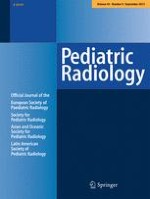 Pancreatic regeneration after near-total pancreatectomy in children with nesidioblastosis