To examine the relative usefulness and suitability of magnetic resonance imaging (MRI) in daily clinical practice as compared to various technologies of computed tomography (CT) in addressing questions of orthodontic interest.

Based on the 2D slices, the parameter of visualizing tooth-germ topography did not yield any significantly different ratings for MRI versus any of the CT scans. While some ratings for the other parameters did involve significant differences, how these should be interpreted depends greatly on the relevance of each parameter. Based on the 3D reconstructions, the only significant difference between technologies was noted for the parameter of visualizing root-surface morphology. Based on the final overall ratings, the imaging performance of the standard MRI protocol was noninferior to the performance of the three CT technologies.

On comparing the imaging performance of MRI and CT scans, it becomes clear that MRI has a huge potential for applications in daily clinical practice. Given its additional benefits of a good contrast ratio and complete absence of ionizing radiation, further studies are needed to explore this clinical potential in greater detail.
Anzeige 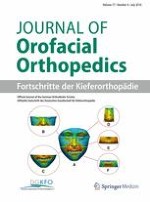