Twelve swine were randomly divided into two groups, each of 6. In each group, two 5-cm-long submucosal tunnels were made to involve 1/3rd of the widths of the anterior and posterior esophageal circumference. The entire mucosal roofs of both tunnels were resected in group A. In group B, the tunnel roof mucosa was incised longitudinally along the length of the tunnel, but without excision of any mucosa. Stricture formation was evaluated by endoscopy after 1, 2, and 4 weeks, respectively. Anatomical and histological examinations were performed after euthanasia.

The extent of loss of esophageal mucosa appears to be a critical factor for esophageal stricture. Inflammation followed by fibrosis may contribute to alteration in compliance of the esophagus but is not the main mechanism of postresection stricture. 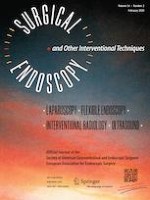