For the first time a multimodal approach to NEC prophylaxis is reported, consisting of early trophic feeding with human breast milk, and enteral administration of an antibiotic, an antifungal agent, and probiotics. A retrospective analysis of local protocol of NEC prophylaxis is presented. Included were all VLBWI admitted to the NICU, including transfers within the first 28 days of life. These infants were divided into two groups, an “inborn group” (infants admitted within the first 24 h of life) and an “outborn group” (infants admitted after the onset of their second day of life). Prophylaxis of NEC according to protocol was started at the day of admission, and was continued until discharge. Between 1998 and 2004, 405 VLBWI were admitted, including all transfers within the first 28 days of life. A total of 334 (82%) infants were admitted within the first 24 h of life (inborn group), and 71 (18%) were admitted after 24 h of life (outborn group). Five infants developed clinical features of necrotizing enterocolitis. The inborn group showed a NEC incidence of 0.7% (two infants), whereas the outborn group showed a NEC incidence of 4.5% (three infants), respectively. This difference was significant (P=0.049, Fisher’s exact test). A surgical treatment with bowel resection was performed in two infants (both from the outborn group). The present study used a combination of different strategies, all having shown to have some beneficial effect, but not having brought a clinical breakthrough in single administration studies. Combinated were the beneficial effects of human breast milk feeding, oral antiobiotics, oral antifungal agents, and the administration of probiotics. In a homogenous group of preterm infants, using this protocol of multimodal NEC prophylaxis, there was a very low incidence of NEC, when started within the first 24 h of life. 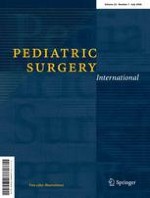 Mesenchymal hamartoma of the liver: is biopsy always necessary?

Pure esophageal atresia with no gap and associated intra-abdominal calcification