Gastric cancer is the second most common cause of cancer-related death worldwide [ 1]. The only potentially curative treatment is surgical resection. However, regional and distant recurrence often occurs after surgery. The standard treatment for advanced or recurrent gastric cancer (AGC) is chemotherapy, given in hope of prolonging survival.
A global standard regimen for AGC is a fluoropyrimidine plus a platinum compound. In Western countries, docetaxel or epirubicin is usually added to this regimen [ 2, 3]. In East Asia, an oral fluoropyrimidine, S-1, has become the most widely used drug for the treatment for AGC [ 4], and S-1 plus cisplatin is regarded as a standard regimen on the basis of the results of the phase III SPIRITS trial comparing S-1 plus cisplatin with S-1 alone for the first-line treatment of AGC [ 5].
Anzeige
Recently, the ToGA (Trastuzumab in Combination with Chemotherapy vs. Chemotherapy Alone for Treatment of HER2-Positive Advanced Gastric or Gastro-oesophageal Junction Cancer) study, an international phase III trial, evaluated trastuzumab, a humanized monoclonal antibody that blocks human epidermal growth factor receptor-2 (HER2) activation, in combination with capecitabine and cisplatin. This study demonstrated that the addition of trastuzumab provided a significant survival benefit, which was much greater in patients whose tumors highly overexpressed HER2 [immunohistochemistry (IHC), 3+ or 2+ ; fluorescent in situ hybridization (FISH) positive] [ 6].
A phase II trial of trastuzumab combined with S-1 plus cisplatin, a standard regimen in East Asia, was performed in patients who had AGC with high HER2 overexpression (HERBIS-1 study) [ 7]. The HERBIS-1 study demonstrated a high response rate (RR 68%) and prolonged survival (OS 16.0 months). Subsequently, S-1 plus cisplatin and trastuzumab became a standard regimen, as did capecitabine plus cisplatin and trastuzumab, for highly HER2-positive AGC in Japan.
However, cisplatin has several important drawbacks, including high incidences of nausea, vomiting [ 8], and renal toxicity [ 9, 10], the need for admission to receive treatment, and other adverse events negatively affecting the quality of life (QoL) of patients. Cisplatin is contraindicated in patients with poor renal function. These disadvantages of cisplatin are particularly problematic in elderly patients. Importantly, gastric cancer is a disease of aging, so the risk of it increases with advancing age.
We thus conducted this phase II study to evaluate the efficacy and safety of S-1 alone plus trastuzumab without cisplatin in elderly patients with highly HER2-positive AGC.
Anzeige

The Japan Clinical Cancer Research Organization (JACCRO) GC-06 study was a multicenter, prospective, phase II trial. The study was performed in accordance with the Declaration of Helsinki and Ethical Guidelines for Clinical Studies in Japan. The protocol was approved by the ethics committees of JACCRO and of each participating center before initiating enrollment. An Independent Data Monitoring Committee reviewed all efficacy and safety data.

Eligible patients had to have a histologically confirmed diagnosis of gastric or esophagogastric junction adenocarcinoma, measurable disease according to the Response Evaluation Criteria in Solid Tumors (RECIST) version 1.1, and highly HER2-positive cancer as confirmed by immunohistochemistry (IHC), fluorescence in situ hybridization (FISH) (IHC 3+ or IHC2+ and FISH positive), or both. Eligible patients also had to fulfill all of the following conditions: an age of 65 years or older at the time of obtaining informed consent; an Eastern Cooperative Oncology Group (ECOG) performance status of 0, 1, or 2; adequate organ function (a leukocyte count between 3500 and 12,000/ml, a neutrophil count at least 2,000/ml, hemoglobin level at least 9.0 g/dl, a platelet count at least 100,000/ml, a serum bilirubin level of no more than 1.5 mg/dl, serum aspartate aminotransferase and alanine aminotransferase levels of no more than 100 IU; serum creatinine level less than 1.2 mg/dl, creatinine clearance no more than 50 ml/min); a left ventricular ejection fraction (LVEF) of ≥50% as measured on echocardiography or multiple gated acquisition (MUGA) scanning within 21 days before enrollment; no prior chemotherapy or radiotherapy for gastric cancer; and an expected survival of at least 3 months. Written informed consent was obtained from all patients.

Patients received S-1 (80–120 mg per day) orally on days 1–28 of a 42-day cycle and trastuzumab (first dose 8 mg/kg; second dose onward 6 mg/kg) intravenously on day 1 of a 21-day cycle (the criteria for withholding, resuming, and dose reduction of S-1 and trastuzumab, and the modification of treatment with S-1 are shown in the table in the “Electronic supplementary material”).

The reported RR of S-1 alone in elderly patients with AGC was 14.3–21.7% [ 11– 13] and the RR of fluoropyrimidine plus cisplatin was reported 35% by ToGA trial. Then, the required sample size was estimated on the basis of a threshold RR of 20% and an expected RR of 35%, 80–90% power, and an alpha value of 0.1 (one-sided) using the binomial test. Due to eventual ineligible patients, the target sample size was determined to be at least 40 patients at a power of 80%. Efficacy was evaluated in all patients who received the study treatment. We used the Kaplan–Meier method to estimate survival curves and Greenwood’s formula to calculate 95% confidence intervals (CI) for survival rates. Statistical analyses were conducted with SAS software, version 9.2.

Patients were enrolled from March 2012 through February 2014. The last follow-up analysis was conducted in March 2016. Forty patients were enrolled before completion of the planned accrual period of 2 years, increasing the power of this study from 80 to 90%. Finally, 51 patients were enrolled in the study within 2 years at 24 centers in Japan. However, two patients were ineligible because they lacked measurable lesions or could not receive the protocol treatment. A total of 50 patients, including the patient with no measurable lesion, were included in safety analyses, and the full analysis set comprised 49 patients (actual power 87%). The characteristics of the 49 patients are shown in Table  1. The median age was 71 years (range 65–85), and the ECOG performance status was 0 in 32 patients, 1 in 14 patients, and 2 in 3 patients. Thirty-seven patients (76%) had differentiated adenocarcinoma. Forty-one patients (84%) had unresectable lesions, and 8 patients (16%) had recurrent disease. The most frequent site of metastasis was lymph nodes (78%), followed by the liver (45%), lung (14%), and peritoneum (14%). The proportions of IHC 3+ and IHC 2+/FISH-positive tumors were 71 and 29%, respectively.
Table 1
Patient characteristics
ECOG PS Eastern Cooperative Oncology Group performance status, IHC immunohistochemistry

All adverse events are summarized in Table  2. Among the hematological adverse events, the rates of grade 3 or higher neutropenia and anemia were 12 and 24%, respectively. The most frequent common nonhematological toxicity was anorexia (any grade 66%; grade 3 or higher 12%). There was no grade 3 or higher nausea or vomiting. The incidence of elevations of the creatinine level of any grade was only 10%, and there was no grade 3 or higher renal toxicity. Grade 3 infusion-related reactions occurred in 1 patient (2%). Heart failure did not occur in any patient. One patient was evaluated to have died from treatment-related causes. This patient was an 80-year-old man with peritoneal metastasis from AGC. There was no severe adverse event during the prior four courses of S-1 plus trastuzumab. Nine days after the fifth dose of trastuzumab, he was found dead at his home. The reason for sudden death was unknown, but we considered the death to be treatment-related because the patient died within 30 days after the last infusion of trastuzumab.
Table 2
Adverse events

Cancer in the elderly is rapidly increasing worldwide. More than 60% of patients with gastric cancer are older than 65 years at the time of diagnosis, and about one-third are older than 75 years [ 14]. Systemic chemotherapy has improved OS and the QoL as compared with supportive care alone in patients with AGC [ 15– 17]. The chronologic age alone is an inadequate reason for avoiding the use of effective cancer treatment that can improve QoL or OS. However, cytotoxic agents such as cisplatin often negatively affect the QoL of elderly patients. A subgroup analysis of the SPIRITS trial reported that the HR of elderly patients was worse than that of younger patients (younger than 60 years of age: HR 0.75; 60–69 years of age: HR 0.98; 70–74 years of age: HR 0.95) [ 5]. On the other hand, a subgroup analysis of the ToGA study reported that the HR was 0.84 in patients younger than 60 years, as compared with 0.66 in patients 60 years or older, and adding trastuzumab to chemotherapy did not increase adverse events [ 6]. Therefore, we hypothesized that cisplatin would not prolong survival in elderly patients with tumors overexpressing HER2, and that combining trastuzumab with chemotherapy should be considered. This multicenter phase II study demonstrated that a fluoropyrimidine plus trastuzumab without cisplatin has favorable efficacy and lower toxicity in elderly patients with HER2-positive AGC.
In our study, the RR and disease control rate (DCR) were 40.8 and 83.7%, respectively. The RR in our study was lower than those in the ToGA (47%) and HERBIS-1 (68%) studies. However, the DCR was comparable to those in the ToGA (79%) and HERBIS-1 (94%) studies. The OS of patients who received a fluoropyrimidine plus trastuzumab without cisplatin was 15.8 months. This survival benefit was similar to those in the HERBIS-1 (16.0 months) and ToGA (highly overexpressing HER2-positive patients, 16.0 months) studies. On the other hand, the PFS of patients who received a fluoropyrimidine plus trastuzumab without cisplatin was 5.1 months, which was much shorter than those in the HERBIS-1 (7.8 months) and ToGA (6.7 months) studies. We attribute the long survival time after the onset of disease progression to the fact that 65.3% of patients received second-line chemotherapy, among whom 59.4% consecutively received trastuzumab. The toxicities of a fluoropyrimidine plus trastuzumab without cisplatin were very mild, as we had expected. In our study, the incidence of grade 3 or higher neutropenia was 12% (HERBIS-1 36%; ToGA 27%), febrile neutropenia was 2% (HERBIS-1 4%; ToGA 5%), grade 3 or higher vomiting was 0% (HERBIS-1 6%; ToGA 6%), and a grade 3 or higher increased creatinine level was 0% (HERBIS-1 6%; ToGA 1%). These mild toxicities of a fluoropyrimidine plus trastuzumab without cisplatin as the first-line treatment for HER2-positive AGC may have had a positive effect on the introduction of second-line treatment. At the start of the second-line treatment, ECOG performance status was 0 in 17 patients, 1 in 15 patients, 2 in 2 patients, and 3 in 1 patient. The incidence of grade 3 or higher anemia in our study was 24% (HERBIS-1 15%; ToGA 12%), which was significantly higher than that in the ToGA study ( p = 0.003). Anemia is easy controlled, but should be effectively managed in elderly patients who receive S-1. All patients could receive treatment on an outpatient basis without being admitted to the hospital. We believe that this factor also contributed substantially to the QoL of the elderly patients.
Anzeige
This study had some limitations. Although the PFS was shorter and the OS was almost the same in HERBIS-1 compared to the ToGA study, no details regarding post-progression treatment were provided for HERBIS-1.

We conclude that trastuzumab plus S-1 alone without cisplatin is an effective and safe treatment that can prolong survival in elderly patients with HER2-positive AGC.

This work was supported by the Japan Clinical Cancer Research Organization (JACCRO GC-06) with funding from Taiho Pharmaceutical Co., Ltd, Japan, under a research contract (no grant number). 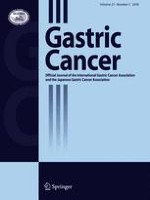