Despite advances in supportive care, the outcome of patients with acute myeloid leukaemia (AML) remains poor with only about 40 % of adults under 60 years of age achieving long-term survival, and in those over 60 years of age, less than 20 % achieve long-term survival [ 1]. Immunotherapeutic strategies, utilising antibodies against tumour antigens, have proved highly effective in other haematological malignancies [ 2] but have yet to become established as standard of care in the management of AML. CD33 is frequently expressed on the surface of AML cells and is rarely expressed outside of the haematological system [ 3]. Two anti-CD33 antibodies have been evaluated in randomised clinical trials: lintuzumab and gemtuzumab ozogamicin (GO, trade name, Mylotarg). GO is a humanised monoclonal antibody against CD33, conjugated to calicheamicin. Calicheamicin cleaves sequence-specific DNA regions causing double-stranded breaks [ 4]. GO was reported to improve overall responses dramatically in adults with relapsed AML [ 5], and as a consequence, GO was given accelerated approval by the US Food and Drug Agency in 2000 but was subsequently voluntarily withdrawn in 2010 because of reports of excessive toxicity [ 6].
Given the conflicting results of different studies and the potential importance of this drug, the aim of this systematic review and meta-analysis is to assess the totality of the evidence on the effectiveness and optimal delivery of anti-CD33 antibody treatment in AML.
Anzeige

A study protocol was drawn up prior to the review being undertaken. We sought to include all randomised controlled trials (RCTs) that included any patient with AML, where one arm included anti-CD33 antibody therapy. AML could be in any form: de novo or secondary. Previous treatment was not an excluding factor. There were no age restrictions. We considered all examples of anti-CD33 antibody treatment, with or without conjugation to other molecules, for example toxins. Differing doses and regimens of the treatment did not result in exclusion in this review.

Searches, developed in consultation with an information specialist, were conducted in MEDLINE (1946–2013), Embase (1974–2013) and the Cochrane Library up to December 2013. Major conference proceedings abstracts—American Society of Hematology (ASH) (2004–2013), European Hematology Association (EHA) (2006–2013) and American Society of Clinical Oncology (ASCO) (1996–2013)—were also searched for unpublished trials. Research registers (ClinicalTrials.gov, controlled trials.com, ISRCTN) were searched for ongoing trials. There were no language restrictions. Search strategies are available from the online data supplement.
Studies retrieved from the database searches were reviewed independently by two people (JL and JK or JW), using title and abstract to make inclusion/exclusion decisions. Full paper copies were obtained for further review where there were uncertainties. Disagreement regarding inclusion was resolved by a third member of the team (JW or JK). The selection pathway (Fig.  1) is presented using a PRISMA flow diagram [ 7].
×

Odds ratios (ORs) and 95 % confidence intervals (CIs) were calculated for dichotomous outcomes. Time-to-event data was extracted using standard methods from Tierney [ 10] and Parmar [ 11]. Observed minus expected (O − E) number of events and variance were calculated from hazard ratios (HR), CIs, p values and survival proportions where available.
Fixed effect meta-analysis methods were used with the I 2 test for statistical heterogeneity performed. Tests for heterogeneity and trend across predefined subgroups were also performed; these subgroups included age, diagnosis, cytogenetic risk group, FLT3-ITD, NPM1, CD33 status, stage of treatment, total cumulative dose, with or without other chemotherapy agents and treatment confounding (whether comparator arm had the same dose of concomitant chemotherapy: yes, no). Results are presented as odds ratios with 95 % CIs for dichotomous endpoints and Peto’s odds ratios with 95 % CIs for time-to-event endpoints. Assumptions for outcome data in studies with incomplete reporting, taken after efforts to contact study authors, are stated in the results.

The search yielded 1974 articles (Fig.  1). A search of online clinical trial databases suggested four pending trials. One trial was not due for completion until January 2020 (AML SG09-09; ClinicalTrials.gov identifier: NCT00893399) and would fit our inclusion criteria. Another, NCRI AML17 (ISRCTN55675535), is due to be completed July 2014. The other two were sponsored by pharmaceutical companies; one was terminated early, and the second did not have available data (further supplementary 5).
Two different anti-CD33 therapies were identified in this systematic review: GO, a humanised monoclonal antibody against CD33 conjugated to a toxin, and lintuzumab, a humanised anti-CD33 monoclonal antibody not conjugated to a toxin. Two trials involving lintuzumab were found [ 12, 13] but only one provided sufficient data for analysis of overall survival; this study [ 13] did not demonstrate a significant impact of lintuzumab on overall survival (HR = 0.94, 95 % CI = 0.63–1.11); however, this study was small and underpowered. Due to their intrinsic biological differences, these studies were omitted from the main meta-analyses that only involved GO. Thus, 11 trials involving 13 randomisations with 7138 patients entered the meta-analysis of trials involving GO [ 12– 26]. A detailed summary of trials included in this meta-analysis can be found in the supplementary data (further supplementary 4), with a brief summary of each study described in Table  1. We also excluded two small trials from the meta-analysis because they did not include the same concomitant chemotherapy drugs in the GO and the comparator arm [ 19, 21]. Out of the 11 trials, two had a second independent randomisation at a latter treatment stage [ 17, 25]. Four studies investigated the use of GO at induction and consolidation phases but with no independent randomisation at the second treatment stage; therefore, these studies contributed to four randomisations only [ 18, 20, 26, 27]. Three further randomisations involved the use of GO at induction [ 16, 17, 25], two independent randomisations at consolidation [ 17, 24] and three at a post-consolidation/maintenance stage [ 22, 23, 25]. One trial used GO as part of a low-intensity regimen [ 15]. Up-to-date overall survival and relapse data for the NCRI AML15 trial was used from the AML16 publication [ 16]. For one study [ 25], CIR and DCR were calculated from an interim publication [ 28]; data from this interim analysis was used for the induction randomisation of this study.
Table 1
Summary table of trials included in meta-analysis

Overall, most publications failed to describe the randomisation and allocation method; without this information, we are unable to assess whether these trials suffered from selection bias. Otherwise, the risk of bias was low for the published trials (supplementary table  1).
Two trials [ 26, 27] were only available in conference proceedings form which limited assessment of risk of bias and data extraction. Of these, one trial [ 27] had available data for all outcomes, although assumptions were made for resistant disease and induction death (see further supplementary 3). The other trial [ 26] only provided data for OS and complete remission (CR) rates. Although data was provided for early deaths, it was unclear whether these deaths were induction related or due to disease. Authors of two unpublished trials [ 26, 27] were contacted to obtain full trial reports, but additional data was not available for analysis. In comparison, eight of the nine published trials [ 15– 18, 20, 22– 25] involving GO provided complete OS data. The exception was the post-consolidation randomisation of one trial [ 25]. Out of the nine published trials involving GO, one did not provide RFS rates for a separate consolidation randomisation [ 17] (further supplementary 2).

The impact of GO on response rates and resistant disease

All induction phase trials had sufficient data for analysis of CR rates. One non-intensive trial was omitted from this analysis because of the different treatment strategy [ 15]. Overall response (OR) rates (CR plus CR with incomplete count recovery (CRi) or platelet recovery (CRp)) were also calculated; two trial results published as abstract form did not have sufficient data for this analysis [ 26, 27]. GO does not have a measurable impact on rates of OR, CR nor CRi/p (Fig.  2 and supplementary figure  1). However, the addition of GO to treatment significantly reduced the rate of resistant disease (failure to eliminate disease) by 23 % (HR = 0.77, 95 % CI = 0.67–0.90, p = 0.0009) (Fig.  2). However, this was at the expense of a statistically significant increase in induction deaths (HR = 1.30, 95 % CI = 1.04–1.63, p = 0.02) (Fig.  2).
×
Anzeige

The impact of GO on relapse rates

The effect of GO on overall survival

GO had no significant effect on OS (HR = 0.96, 95 % CI = 0.90–1.02, p = 0.2) (Fig.  5), nor was there any evidence for a benefit of GO at any particular treatment stage. However, AML is a heterogeneous condition clinically and by genetic groupings. These analyses were limited by the number of trials involved. However, in one subgroup, there was evidence of benefit from the use of GO in terms of OS: this was in patients with favourable risk cytogenetics (HR = 0.46, 95 % CI = 0.29–0.73, p = 0.001) (test for trend between subtotals p = 0.02; test for heterogeneity between subtotals p = 0.02) (Fig.  6).
×
×
GO did not improve OS, in subgroup analyses of induction trials based on age, cumulative dose nor diagnosis (primary vs. secondary AML) (supplementary figures  6–8). Available data for FLT3-ITD and NPM1 analysis was limited to only three trials and was unable to detect a significant influence of these subgroups on OS (data not shown). A subgroup analysis based on treatment confounding was performed (supplementary figure  9): there was some evidence of greater benefit for the use of GO in trials without confounding chemotherapy (test for heterogeneity p = 0.09). There is no evidence that CD33 positivity influences OS of patients treated with GO (supplementary figure  10).
Anzeige

We investigated in detail the increased reports of liver toxicity and incidences of severe veno-occlusive disease (VOD) [ 29], particularly in the setting of haematopoietic stem cell transplantation [ 30]. This is displayed in the supplementary data (supplementary table  2), alongside measures of treatment-related fatality. Data was available from four trials using induction treatment (with some coupled with consolidation stage), involving a total of 789 patients [ 18, 20, 25, 26]. Twelve cases of VOD were reported; however, there was insufficient data available to report the incidence in the control arm. From these trials, there were five fatalities associated with VOD or severe hepatic toxicity when GO was used. Three trials [ 16, 17, 27] did not specify the number of cases of VOD in the GO arm but declared there were no difference incidence by comparison of study arm. As described above, there was a significant difference in death during induction (Fig.  2 which was extracted from endpoints defined directly as induction deaths [ 16– 18, 20, 25, 27], with one omitted due to data provided only of early deaths [ 26]).

We would like to thank CRUK core funding for Birmingham CRCTU, Sue Bayliss for her help in devising search strategies and all the authors we have contacted for updates on progress of their trials.

This study was supported by CRUK core funding to Birmingham CRCTU.

The authors confirm that there are no financial disclosures for this study.
Open Access This article is distributed under the terms of the Creative Commons Attribution License which permits any use, distribution, and reproduction in any medium, provided the original author(s) and the source are credited. 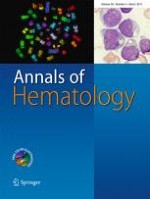