No appropriate management of chronic intestinal pseudo-obstruction (CIP) has been established.

The clinicopathological parameters of 103 cases collected by a nationwide questionnaire study were reviewed.

The segments of the diseased bowels should be considered in determining the indications for surgical treatments in CIP patients. 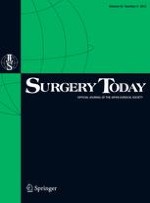 Mucocele-like tumor associated with ductal carcinoma in situ diagnosed as mucinous carcinoma by fine-needle aspiration cytology: report of a case

Single-incision laparoscopic Heller myotomy and Dor fundoplication for achalasia: report of a case