Duchenne muscular dystrophy (DMD) is an X-linked, inherited disorder causing dilated cardiomyopathy with variable onset and progression. Currently we lack objective markers of the effect of therapies targeted towards preventing progression of subclinical cardiac disease. Thus, our aim was to compare the ability of native T1 and extracellular volume (ECV) measurements to differentiate risk of myocardial disease in DMD and controls.

Twenty DMD subjects aged 14.4 ± 4 years had an LVEF of 56.3 ± 7.4 %; 12/20 had LGE, all confined to the lateral wall. Sixteen controls aged 16.1 ± 2.2 years had an LVEF 60.4 ± 5.1 % and no LGE. Native T1 and ECV values were significantly higher in the DMD group (p < 0.05) with both MOLLI and SASHA imaging techniques. Native T1 demonstrated a 50 % increase in the ability to predict disease state (control, DMD without fibrosis, DMD with fibrosis). ECV demonstrated only the ability to predict presence of LGE, but could not distinguish between controls and DMD without fibrosis. 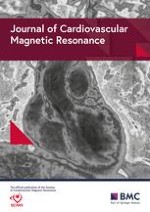