To present the outcomes of our case series of head and neck necrotizing fasciitis (HNNF) in which vacuum-assisted closure (VAC) is used in most of the cases in the treatment.

Eleven patients were treated for HNNF between January 2008 and January 2017. Patients were two females and nine males, the mean age was 57.1. Oral cavity and tracheotomy/tracheostomy sites were the main aetiological foci of the infection. Three patients were treated with aggressive debridements and conventional dressing, whereas eight patients were treated with incision and exploration followed by limited skin excisions and VAC dressing. The mean number of surgical debridements was 2.3. The mean length of hospital stay was 41.8 days. Complications were observed in all patients except one. The mortality rate of HNNF in our series was 18%. The cause of death was severe sepsis and multi-organ failure in one case and mediastinitis followed by respiratory distress syndrome in the other case. 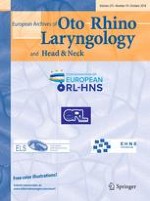 Increased incidence of Warthin tumours of the parotid gland: a 42-year evaluation

Simultaneous acquisition of 40- and 80-Hz auditory steady-state responses for a direct comparison of response amplitude, residual noise and signal-to-noise ratio

Comparison of the effect of the lidocaine, tetracaine, and articaine application into nasal packs on pain and hemorrhage after septoplasty

Correction to: Increased incidence of Warthin tumours of the parotid gland: a 42-year evaluation