Neoadjuvant chemotherapy (NACT) followed by interval debulking surgery (IDS) is a treatment strategy for ovarian cancer patients with unresectable disease or poor performance status (PS). This strategy has been used in the treatment of advanced endometrial cancer and a survival benefit has been shown in patients who are subsequently able to undergo interval cytoreduction. This study sought to review our single institution experience with NACT for advanced endometrial cancer.

We conducted a retrospective review of all patients who received NACT for advanced endometrial cancer at two institutions in New York City between 2002 and 2016.

Unlike ovarian cancer, less than half of the patients undergoing NACT for endometrial cancer underwent IDS, none had a complete response, and 41% had disease progression during NACT. However, endometrial cancer patients who underwent IDS had a high rate of optimal cytoreduction. Both response to NACT and IDS were associated with improved survival. 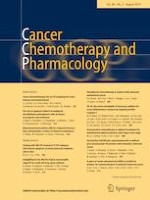 The effects of lapatinib on cardiac repolarization: results from a placebo controlled, single sequence, crossover study in patients with advanced solid tumors

Phase I study of BGT226, a pan-PI3K and mTOR inhibitor, in Japanese patients with advanced solid cancers