Although the immune and nervous systems have long been considered independent biological systems, they turn out to mingle and interact extensively. The present review summarizes recent insights into the neural pathways activated by and involved in infection-induced inflammation and discusses potential clinical applications. The simplest activation concerns a reflex action within C-fibers leading to neurogenic inflammation. Low concentrations of pro-inflammatory cytokines or bacterial fragments may also act on these afferent nerve fibers to signal the central nervous system and bring about early fever, hyperalgesia and sickness behavior. In the brain, the preoptic area and the paraventricular hypothalamus are part of a neuronal network mediating sympathetic activation underlying fever while brainstem circuits play a role in the reduction of food intake after systemic exposure to bacterial fragments. A vagally-mediated anti-inflammatory reflex mechanism has been proposed and, in turn, questioned because the major immune organs driving inflammation, such as the spleen, are not innervated by vagal efferent fibers. On the contrary, sympathetic nerves do innervate these organs and modulate immune cell responses, production of inflammatory mediators and bacterial dissemination. Noradrenaline, which is both released by these fibers and often administered during sepsis, along with adrenaline, may exert pro-inflammatory actions through the stimulation of β1 adrenergic receptors, as antagonists of this receptor have been shown to exert anti-inflammatory effects in experimental sepsis. 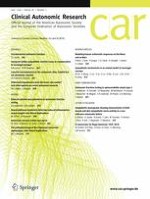 Modeling human orthostatic responses on the Moon and on Mars

Increased cardiac sympathetic activity: Cause or compensation in vasovagal syncope?

Sympathetic mechanisms in an animal model of vasovagal syncope