Rates of neurocognitive risk range from 35–50% of school-aged children with isolated single suture craniosynostosis (SSC). It has been hypothesized that early surgical intervention to release suture fusion reduces risk for increased intracranial pressure (ICP) and the corresponding risk to neurodevelopment. However, studies assessing children with SSC have been inconsistent in finding an association between neurocognitive development, age of surgery, and ICP.

SSC produces notable distortion of the cranial vault and underlying brain mass. Although a linear relationship between skull distortion, ICP, and neurocognitive deficits has generally been assumed, recent studies have postulated an interactive process between the skull and developing brain that results in neuroanatomical changes that are not limited to areas directly beneath the fused suture. The specific neuropsychological deficits identified in children with SSC including problems with attention and planning, processing speed, visual spatial skills, language, reading, and spelling may be related to the anatomic differences that persist after correction of suture fusion.

Available literature on neurocognitive development of children with SSC is suggestive of mild but persistent neuropsychological deficits, which become more significant as cognitive demands increase at school age. Anatomical studies of children without SSC are beginning to identify particular groups of brain structures that if disrupted or malformed, may be associated with specific cognitive deficits. Controlled research investigating the relationship between persistent anatomical changes and neurocognitive functioning of school-aged children with SSC is needed. 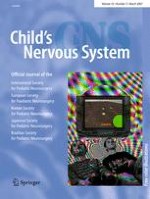 The Strata programmable valve for shunt-dependent hydrocephalus: the pediatric experience at a single institution

Outcome of hemispheric surgeries for refractory epilepsy in pediatric patients