Neostriatal abnormalities can be observed in a very large number of neurological conditions clinically dominated by the presence of movement disorders. The neuroradiological picture in some cases has been described as “bilateral striatal necrosis” (BSN). BSN represents a condition histo-pathologically defined by the involvement of the neostriata and characterized by initial swelling of putamina and caudates followed by degeneration and cellular necrosis. After the first description in 1975, numerous acquired and hereditary conditions have been associated with the presence of BSN. At the same time, a large number of disorders involving neostriata have been described as BSN, in some cases irrespective of the presence of signs of cavitation on MRI. As a consequence, the etiological spectrum and the nosographic boundaries of the syndrome have progressively become less clear. In this study, we review the clinical and radiological features of the conditions associated with MRI evidence of bilateral striatal lesions. Based on MRI findings, we have distinguished two groups of disorders: BSN and other neostriatal lesions (SL). This distinction is extremely helpful in narrowing the differential diagnosis to a small group of known conditions. The clinical picture and complementary exams will finally lead to the diagnosis. We provide an update on the etiological spectrum of BSN and propose a diagnostic flowchart for clinicians. 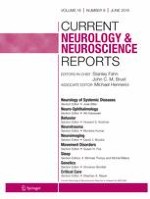 Advances of Molecular Imaging in Epilepsy