The urea cycle disorders constitute a group of rare congenital disorders caused by a deficiency of the enzymes or transport proteins required to remove ammonia from the body. Via a series of biochemical steps, nitrogen, the waste product of protein metabolism, is removed from the blood and converted into urea. A consequence of these disorders is hyperammonaemia, resulting in central nervous system dysfunction with mental status changes, brain oedema, seizures, coma, and potentially death. Both acute and chronic hyperammonaemia result in alterations of neurotransmitter systems. In acute hyperammonaemia, activation of the NMDA receptor leads to excitotoxic cell death, changes in energy metabolism and alterations in protein expression of the astrocyte that affect volume regulation and contribute to oedema. Neuropathological evaluation demonstrates alterations in the astrocyte morphology. Imaging studies, in particular 1H MRS, can reveal markers of impaired metabolism such as elevations of glutamine and reduction of myoinositol. In contrast, chronic hyperammonaemia leads to adaptive responses in the NMDA receptor and impairments in the glutamate–nitric oxide–cGMP pathway, leading to alterations in cognition and learning. Therapy of acute hyperammonaemia has relied on ammonia-lowering agents but in recent years there has been considerable interest in neuroprotective strategies. Recent studies have suggested restoration of learning abilities by pharmacological manipulation of brain cGMP with phosphodiesterase inhibitors. Thus, both strategies are intriguing areas for potential investigation in human urea cycle disorders. 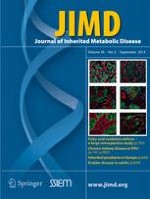