Neuromyelitis optica (NMO) or Devic’s disease typically involves the optic nerves and the spinal cord and is most often relapsing. The pathogenesis is one of an acute inflammatory process targeting astrocytes and resulting in demyelination, as well as axonal injury. In a high proportion of recognized cases of NMO, there is a highly specific autoantibody (NMO-IgG), which is directed to the common central nervous system water channel, aquaporin-4. NMO attacks usually result in severe residual visual impairment or myelopathy. Despite the publication of new diagnostic criteria for NMO, uncertainty at the time of the index event as to whether the attack is due to multiple sclerosis or NMO can cause therapeutic hesitancy. Nevertheless, whenever a reasonable degree of suspicion exists, therapies directed to limiting acute injury and to preventing subsequent further injury mediated by humoral mechanisms should be instituted immediately. Investigations can then be completed and the therapeutic direction confirmed.
For an acute attack, high-dose methylprednisolone and plasma exchange (generally given sequentially) are most useful.
For the prevention of further attacks, selective or nonselective immunosuppressive therapy directed to humoral mechanisms is preferred. Agents recommended are oral azathioprine or mycophenolate mofetil with or without low-dose prednisolone or rituximab. Therapy should be planned to continue for up to 5 years in all patients, including those with a single attack who are at high risk of further relapse.
Regrettably, there are no controlled trials for the treatment of either the classic manifestations of NMO or the so-called limited manifestations known as NMO spectrum disorders. The therapeutic opinions expressed in this article are therefore based on the current understanding of the pathogenesis of this disorder, reports of small series of patients receiving a range of treatments, and expert opinions.
Anzeige 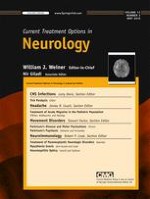 Treatment of Acute Migraine in the Pediatric Population