Acute unilateral lesions of vestibular graviceptive pathways from the otolith organs and semicircular canals via vestibular nuclei and the thalamus to the parieto-insular vestibular cortex regularly cause deviations of perceived verticality in the frontal roll plane. These tilts are ipsilateral in peripheral and in ponto-medullary lesions and contralateral in ponto-mesencephalic lesions. Unilateral lesions of the vestibular thalamus or cortex cause smaller tilts of the perceived vertical, which may be either ipsilateral or contralateral. Using a neural network model, we previously explained why unilateral vestibular midbrain lesions rarely manifest with rotational vertigo. We here extend this approach, focussing on the direction-specific deviations of perceived verticality in the roll plane caused by acute unilateral vestibular lesions from the labyrinth to the cortex. Traditionally, the effect of unilateral peripheral lesions on perceived verticality has been attributed to a lesion-based bias of the otolith system. We here suggest, on the basis of a comparison of model simulations with patient data, that perceived visual tilt after peripheral lesions is caused by the effect of a torsional semicircular canal bias on the central gravity estimator. We further argue that the change of gravity coding from a peripheral/brainstem vectorial representation in otolith coordinates to a distributed population coding at thalamic and cortical levels can explain why unilateral thalamic and cortical lesions have a variable effect on perceived verticality. Finally, we propose how the population-coding network for gravity direction might implement the elements required for the well-known perceptual underestimation of the subjective visual vertical in tilted body positions. 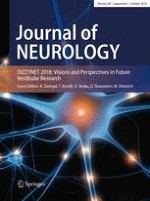