Schizophrenia is a chronic, disabling neuropsychiatric disorder characterised by positive, negative and cognitive symptoms. The aetiology is not known, although genetic, imaging and pathological studies have implicated both neurodevelopmental and neurodegenerative processes. The substantia nigra is a basal ganglia nucleus responsible for the production of dopamine and projection of dopaminergic neurons to the striatum. The substantia nigra is implicated in schizophrenia as dopamine has been heavily implicated in the dopamine hypothesis of schizophrenia and the prevalent psychotic symptoms and the monoamine theory of depression, and is a target for the development of new therapies. Studies into the major dopamine delivery pathways in the brain will therefore provide a strong base in improving knowledge of these psychiatric disorders. This post-mortem study examines the cytoarchitecture of dopaminergic neurons of the substantia nigra in schizophrenia (n = 12) and depression (n = 13) compared to matched controls (n = 13). Measures of nucleolar volume, nuclear length and nuclear area were taken in patients with chronic schizophrenia and major depressive disorder against matched controls. Astrocyte density was decreased in schizophrenia compared to controls (p = 0.030), with no change in oligodendrocyte density observed. Significantly increased nuclear cross-sectional area (p = 0.017) and length (p = 0.021), and increased nucleolar volume (p = 0.037) in dopaminergic neurons were observed in schizophrenia patients compared with controls, suggesting nuclear pleomorphic changes. No changes were observed in depression cases compared to control group. These changes may reflect pathological alterations in gene expression, neuronal structure and function in schizophrenia. 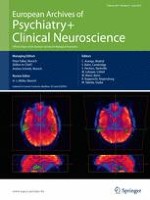 Fibrillary astrocytes are decreased in the subgenual cingulate in schizophrenia

The neuropathology of schizophrenia: new insights from postmortem studies

S100B is downregulated in the nuclear proteome of schizophrenia corpus callosum