Neurosarcoidosis is relatively rare and has diverse manifestations. The clinical characteristics, diagnosis, treatment, and outcome for neurosarcoidosis in China are poorly understood. We retrospectively analyzed the clinical features, laboratory and imaging results, treatment, and outcomes in patients who met the criteria for definite or probable neurosarcoidosis in Xuan Wu Hospital of Capital Medical University from 2000 to 2015. Eight patients were included in this study, accounting for 5.84% of all cases with sarcoidosis. The mean age at onset was 50.25 years, and 75% of the patients were female. Five cases had a prior diagnosis of extraneurologic sarcoidosis, leading to a shorter lag time between onset of symptoms and diagnosis (3.4 vs. 16.2 months). Neurological symptoms were the first clinical feature of sarcoidosis in three cases, and no patients presented isolated nervous system manifestation. The most common symptom was sensory disturbance, and the most common site of nervous system involvement was brain parenchyma and meninges. Disturbance of consciousness, seizures, hydrocephalus, and abnormal CSF assays were associated with poor prognosis. All patients were treated with corticosteroids and one was also given azathioprine. Five patients had complete or partial improvement, one remained stabilized, and two deteriorated and died. Neurosarcoidosis is difficult to diagnose early and might be associated with a poor prognosis. Tissue biopsy for a definitive diagnosis and aggressive therapy with corticosteroids plus other alternative immunosuppressive treatment should be recommended in China. 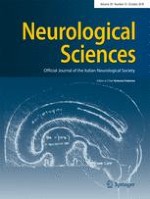 The serum level of inflammatory markers in chronic and episodic migraine: a case-control study

Estimating dementia cases in the immigrant population living in Italy

Letter to the editor: lung metastasis in WHO grade I meningioma