Toxocariasis is a widespread zoonosis, which may result in central nervous system injury.

One hundred cases of neurotoxocariasis were identified in literature. The majority of patients were male (58 %), with a median age of 42 years. The predominant clinical pictures were myelitis (60 %), encephalitis (47 %) and/or meningitis (29 %). Fever was inconstant (23 %). The suspected mode of transmission, mentioned in only 49 % of cases, was mainly contact with dogs and/or cats (67 %) and ingestion of contaminated food (31 %). Diagnostic imaging examinations found hypodense lesions in cerebral scanner sequences and hyperintense lesions in cerebral MRI T2-weighted sequences in 65 and 57 % of encephalitis cases respectively, and in 92 % of myelitis cases in medullary MRI T2-weighted sequences. The detection of antibodies against Toxocara spp. was almost constant in blood and cerebrospinal fluid (CSF), 99 and 93 %, respectively. The two most commonly used drugs were corticosteroids (72 %) and/or albendazole (68 %) for a period of at least 3 weeks, which often needed to be repeated. Despite a low mortality rate (6 %), complete remission was observed in only 40 % of cases. 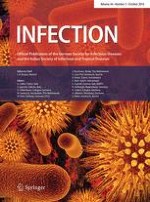 Septic arthritis of the knee due to Raoultella ornithinolytica

A fatal case of disseminated chronic Q fever: a case report and brief review of the literature