Hypercoagulability is a major cancer-associated complication linked to poor patient prognosis. The production of neutrophil extracellular traps (NETs) is increasingly found to be linked with the development and metastasis of cancer, as well as with thrombi formation in cancer patients. We hypothesized that the neutrophil NET release may be triggered by specific cytokines in oral squamous cell carcinoma (OSCC) patients, thereby predisposing them to a hypercoagulable state. Moreover, we have evaluated the interaction between NETs and endothelial cells (ECs).

NET procoagulant activity was assessed based on fibrin and purified coagulation complex production assays, as well as by measuring coagulation time (CT). We further used confocal microscopy to quantify the exposure of phosphatidylserine (PS), fibrin strands, and cell FVa/Xa binding.

OSCC patients with stage III/IV exhibited elevated plasma NET levels compared to stage I/II or CTR (all P < 0.05). Neutrophils from OSCC patients are predisposed to amplified NET release compared to those from CTR. Furthermore, depleting IL-8, IL-6, and TNF-α led to a reduction in NET release in the plasma. OSCC NETs increased thrombin and fibrin generation and decreased CT significantly (P < 0.05). When NETs were isolated and used to treat ECs, these cells exhibited disrupted morphology by retracting from their cell–cell junctions and convert to a procoagulant phenotype. These effects could be attenuated by approximately 70% using DNase I.

Our findings are consistent with a model wherein OSCC drives a systemic inflammatory state, which, in turn, drives neutrophils to prime and release NETs, which drive the development of a hypercoagulable state. Intervening in this process may be a viable means of disrupting these undesirable coagulation dynamics in stage III/IV OSCC patients. 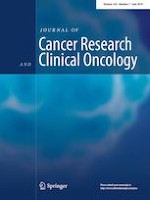 Information needs, communication and usage of social media by cancer patients and their relatives

Predicting the risk of locoregional recurrence after early breast cancer: an external validation of the Dutch INFLUENCE-nomogram with clinical cancer registry data from Germany

Patient-reported outcomes and health-related quality of life for cetuximab versus bevacizumab in metastatic colorectal cancer: a prospective cohort study