The issue of sexuality education has been—and still is—contested to varying degrees. While sexuality education in many western European countries has a long tradition going back to the 1950s, in other parts of the world it became more prominent after the onset of the HIV epidemic in the 1980s. At present, the field is characterized by different underlying paradigms often rooted in moral convictions. The dominant approach in the US to sexuality education is mainly influenced by public health concerns—including prevention of HIV and other sexually transmitted infections (STIs), unintended pregnancies, and possibly sexual abuse. This approach may include“abstinence-only” messages, but could also be more open and offer comprehensive information as a means to harm reduction. Another approach, rooted in a European understanding of sexuality education and published in the“Standards for Sexuality Education in Europe” (2010), is based on the human rights of children and adolescents to access information and education and at its core has a positive understanding of sexuality. This article highlights international developments around sexuality education, with a focus on Europe. It also compares differences in approaches and their often implicit underlying paradigms, with the aim of generating more international discussion on the advantages and disadvantages of these different approaches. International organizations need to be aware of the different approaches and need to reflect them in their work. 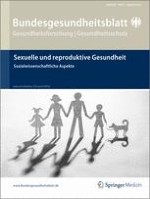