The aim of the study was to enhance our understanding of the pathogenesis of the ataxia of Charlevoix–Saguenay, based on the findings presented herein. Five patients with a molecular diagnosis of this disease underwent clinical, radiological, ophthalmologic and electrophysiological examinations. Five novel mutations, which included nonsense and missense variants, were identified, with these resulting in milder phenotypes. In addition to the usual manifestations, a straight dorsal spine was found in every case, and imaging techniques showed loss of the dorsal kyphosis. Cranial MRI demonstrated hypointense linear striations at the pons. Tensor diffusion MRI sequences revealed that these striations corresponded with hyperplastic pontocerebellar fibres, and tractographic sequences showed interrupted pyramidal tracts at the pons. Ocular coherence tomography demonstrated abnormal thickness of the nerve fibre layer. Electrophysiological studies showed nerve conduction abnormalities compatible with a dysmyelinating neuropathy, with signs of chronic denervation in distal muscles. The authors suggest that the hyperplastic pontocerebellar fibres compress the pyramidal tracts at the pons, and that the amount of retinal fibres traversing the optic discs is enlarged. These facts point to the contribution of an abnormal developmental mechanism in the ataxia of Charlevoix–Saguenay. Accordingly, spasticity would be mediated by compression of the pyramidal tracts, neuromuscular symptoms by secondary axonal degeneration superimposed on the peripheral myelinopathy, while the cause of the progressive ataxia remains speculative. The distinctive aspect of the dorsal spine could be of help in the clinical diagnosis. 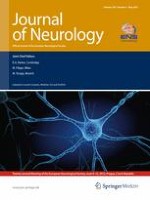