A new low-level laser therapy (LLLT) protocol is proposed and compared to another previously studied, in animal models, aiming to establish a more practical LLLT protocol. Protocol 1, the same used in other works and based on the clinical LLLT protocol for bone regeneration, consists of punctual transcutaneous applications in the defect region with fluence of 16 J/cm2 every 48 h for 15 days. Protocol 2, proposed in this work, consists of three sessions: the first application directly on the defect site with fluency of 3.7 J/cm2, during the surgical procedure, followed by two transcutaneous applications, 48 and 120 h postoperatively. The Thera Lase® (λ = 830 nm) was used, and the dosimetry of the first application of protocol 2 was calculated based on in vitro studies. Forty-five male rats were used, in which critical-size bone defects with 8 mm of diameter were surgically created in calvaria. The animals were randomly divided into three groups of 15 animals, named group 1 (protocol 1), group 2 (protocol 2), and control, which was not submitted to laser treatment. After 7, 15, and 45 days, five animals of each group were euthanized, and the pieces of calvarial bone were collected for microscopic and immunohistochemistry for vascular endothelial growth factor (VEGF), osteocalcin (OC), and osteopontin (OP) analysis. Histomorphometry showed that newly formed bone of 15-day samples from group 2 is higher than the control group (p < 0.05, ANOVA, Tukey). At 7 days, in the central part of the defect, VEGF expression was the same for all groups, OC was higher for protocol 2, and OP for protocol 1. The results suggest LLLT using the protocol 2 hastened the bone healing process in the early periods after surgery. 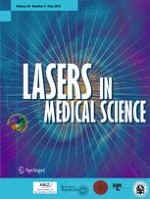 Evaluation of low-level laser therapy, platelet-rich plasma, and their combination on the healing of Achilles tendon in rabbits