Traumatic brain injury (TBI) is not only a leading cause for morbidity and mortality in young adults (Bruns and Hauser, Epilepsia 44(Suppl 10):210, 2003), but also a leading cause of seizures. Understanding the seizure-inducing mechanisms of TBI is of the utmost importance, because these seizures are often resistant to traditional first- and second-line anti-seizure treatments. The early post-traumatic seizures, in turn, are a contributing factor to ongoing neuropathology, and it is critically important to control these seizures. Many of the available anti-seizure drugs target gamma-aminobutyric acid (GABAA) receptors. The inhibitory activity of GABAA receptor activation depends on low intracellular Cl−, which is achieved by the opposing regulation of Na+–K+–Cl− cotransporter 1 (NKCC1) and K+–Cl−–cotransporter 2 (KCC2). Up-regulation of NKCC1 in neurons has been shown to be involved in neonatal seizures and in ammonia toxicity-induced seizures. Here, we report that TBI-induced up-regulation of NKCC1 and increased intracellular Cl− concentration. Genetic deletion of NKCC1 or pharmacological inhibition of NKCC1 with bumetanide suppresses TBI-induced seizures. TGFβ expression was also increased after TBI and competitive antagonism of TGFβ reduced NKKC1 expression, ameliorated reactive astrocytosis, and inhibited seizures. Thus, TGFβ might be an important pathway involved in NKCC1 up-regulation after TBI. Our findings identify neuronal up-regulation of NKCC1 and its mediation by TGFβ, as a potential and important mechanism in the early post-traumatic seizures, and demonstrate the therapeutic potential of blocking this pathway. 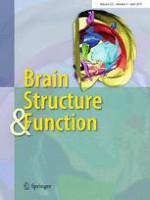 Rapid language-related plasticity: microstructural changes in the cortex after a short session of new word learning

Connectivity-based parcellation of the macaque frontal cortex, and its relation with the cytoarchitectonic distribution described in current atlases