The purpose of this study was to compare femoral tunnel geometry including tunnel position, length, and graft bending angle between trans-portal and outside-in techniques in anterior cruciate ligament (ACL) reconstruction and discover whether such differences in tunnel geometry could influence graft healing or clinical outcome.

Sixty-four patients with anatomical single-bundle ACL reconstruction performed with either trans-portal technique (32 patients, one centre) or outside-in technique (32 patients, the other centre) were included in this retrospective study. Femoral tunnel location and length, and graft bending angle at the femoral tunnel were analysed on 3D CT knee model. The location and length of the femoral tunnel and graft bending angle were compared between the two techniques. All patients underwent MRI scans at around 1 year following ACL reconstruction. It was found that all patients had intact ACL graft on MRI images. On oblique axial image taken after ACL reconstruction to determine graft healing at femoral and tibial tunnels and the intra-articular portion, graft signal intensity ratio was calculated by dividing signal intensity (SI) of the reconstructed ACL by that of posterior cruciate ligament (PCL) in the region of interest selected with Marosis software. Clinical outcomes regarding Tegner activity scores, the International Knee Documentation Committee (IKDC) evaluation scores, Lachman test, and pivot shift test results were also compared between the two groups.

While the location of femoral tunnel was similar to each other in both groups, the femoral tunnel length was longer in the outside-in technique (37.0 vs. 32.4 mm, p = .02). Meanwhile, the outside-in technique showed significantly more acute graft tunnel angle than the trans-portal technique (106.7° vs. 113.8°, p = .01). However, signal intensity ratios of grafts (compared with SI of PCL) were similar in femoral and tibial tunnels and intra-articular portions. Moreover, there were no statistically significant differences in terms of IKDC scores (89.4 vs. 90.5, n.s.) or Tegner activity scores (6.2 vs. 6.4, n.s.) between the two groups. There was no significant difference in measurement of Lachman or Pivot shift test either between the two groups. 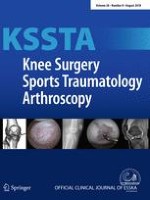