In order to evaluate complication rates of dentoalveolar surgery in patients with congenital bleeding disorders, a retrospective case–control study was performed.

A collective of patients with congenital bleeding disorders (n = 69), who received common oral surgery procedures in combination with intense perioperative monitoring and coagulation factor substitution at the University Hospital of Bonn between 1992 and 2011, was matched with patients without bleeding disorders by age, sex, and type of surgery. In addition to the rates of perioperative bleeding and other complications, the duration of surgery and the use of local hemostatic agents were compared between both cohorts. 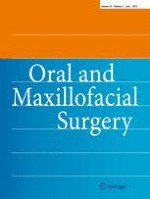 Evaluation of third molar development and its relation to chronological age: a panoramic radiographic study