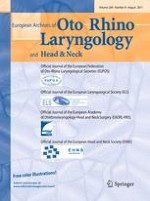 The follow-up of patients with head and neck cancer: an analysis of 1,039 patients